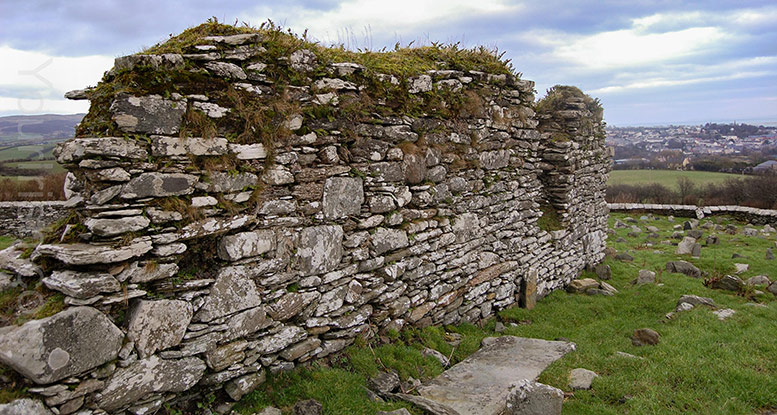 Cooley monastery is located in a small field outside of Moville town in County Donegal. Its a site of important historical significance and what looks to be an old graveyard, it’s actually one of the earliest monastic sites in Ireland. The graveyard entrance is shadowed by a tall undecorated wheeled High Cross. Within the walled perimeter are the remains of two churches or at least one of their walls. It also contains a tomb, known as the Skull House, and several other objects.

During St Patrick’s pilgrimage in Ireland he made his way into Inishowen, Ireland’s most northernly area. As he converted important people in the area to Christianity he was donated a small piece of land to be used as a place of worship. With this land, Patrick proceeded to establish a small church. Its believed he built a large tall high cross that stood at the entrance. 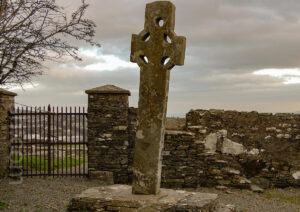 The wheeled High Cross at Cooley is over 10ft tall. It’s not only undecorated but its top stone has an uncommon feature not found in many other High Crosses in Ireland.

The top stone has a borehole which may have been used in pagan times as part of a hand-tying ceremony. St Patrick may have used this stone to help him ease druids into Christianity by using familiar symbols. However, as this occurred before written records began in Ireland we can only believe this to be part of Irish Mythology.

The Skull house of Cooley 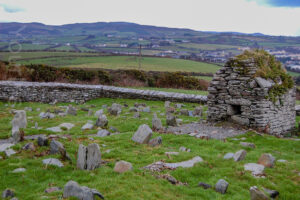 Another famous feature of Cooley is the Skull House, a small stone house constructed with a stone roof. The Skull house is very similar to a Clochán (beehive huts), found in the southwest of Ireland, and even the Cleit’s found in St Kilda in Scotland.

Cooley Skull house is believed to be tomb-shrine associated with St. Finnian, one the first Abbott’s assigned to the monastery.

Located at the bottom of the graveyard the Skull House was believed to have stored human skulls and bones. However, such reports could most likely be local storytellers adding a bit of mystery to the site as no such bones exist today. 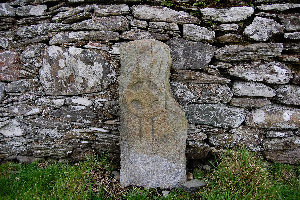 During an excavation of the site in 2016, a number of artifacts uncovered suggested the site held importance for crafting, like a lot of other monastic sites. Some of the objects found included charcoal, polished stones, glass, pottery, and iron ore.

Other findings included a possible paved path, a large stone structure, and a total of 20 crosses. Crosses found are similar in design with those found at the famous monastery on Iona Island. This would suggest that its possible both monasteries were indeed in contact with each other.