On the summit of Knocknarea Mountain (320 meters in height) in County Sligo, a large Cairn can be found known locally as ‘Miosgan Meadhba’ (Maeve’s Cairn).

With a flat-top Maeve’s Cairn measures 55m in diameter and 10m high. It is one of Ireland’s finest examples of ancient Cairn’s.

Local folklore says that the Iron Age Queen of Connaught, Meave, is buried here. Queen Meave is known in Irish legends for Táin Bó Cúailnge (Cattle Raid of Cooley) when she invaded Ulster to steal a stud bull by the name of Donn Cuailnge. Folklore says that she is buried in the Cairn with her full body Armour on and in a standing position facing her enemies in Ulster. If you stand at the Cairn facing north you can actually see Ulster far in the distance.

Folklore also mentions that its bad luck to remove a stone from the Cairn but good luck to take a stone up the hill and place it on the Cairn. A reason why this Cairn has probably stood for so long and well preserved.

When was Maeve’s Cairn Built?

Although the Cairn Knocknarea mountain has never been excavated archaeologists believe it may date back to the Neolithic period in Ireland.

Roger Walker, a local landlord, and antiquarian, investigated the sites at Carrowmore destroying several of its satellite monuments. He had planned to investigate Maeve’s Cairn but died before doing so.

A Swedish archaeologist by the name of Dr. Stefan Bergh surveyed all the monuments and published a book with his findings. He found a small platform 6 meters wide and 30cm high that runs around the cairn with a similar ring around the small satellite to the North of Meave’s Cairn. Bergh had also found approx 27 hut sites on the summit and south shoulder of Knocknarea. He also found 4 kilometers of neolithic stonewalls that run along the south and east edges of the summit.

Even though all we can see of Maeve’s Cairn today is a large mound of stones, its very possible that within it are fully structured chambers such as the ones seen in Newgrange at knowth.

Maeve’s Cairn can be seen for miles as it sits on top of Knocknarea mountain. It’s easy to find but the climb to the summit is not for the faint-hearted. 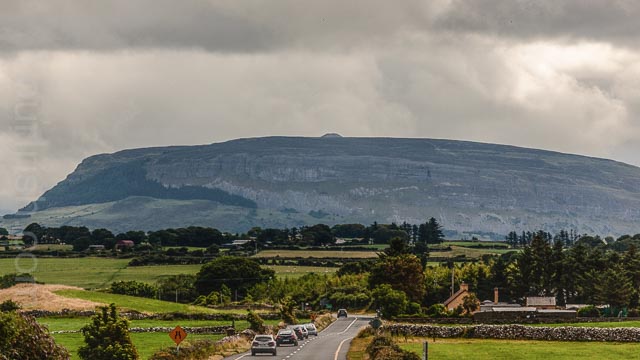 From Sligo town center go towards Strandhill Road and onto the R292. Keep on this road until you see the road signs for Maeve’s Cairn. It’s very well signposted and easy to find from here.

Note: The path is not suitable for pushchairs, wheelchairs or prams. It’s a very rough path so walking shoes are highly recommended. The climb to the summit is not easy and not recommended for elderly people or anyone with walking difficulties.

We advise to take water but also to take a lot of rests on the climb up, enjoy the views as you rest.

The path leading down from Knocknarea mountain is very steep with lots of stones, it can be very easy to fall and cause injury so be careful.