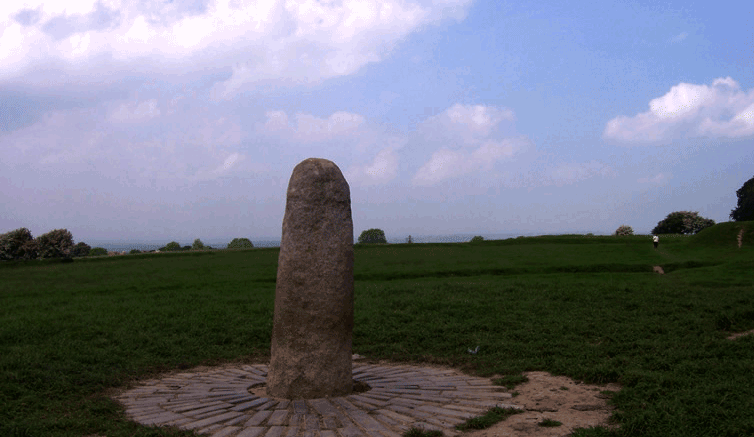 Located in County Meath is the Hill Of Tara (Teamhair na Rí) known as the Hill of the Kings which runs between Dunshaughlin and Navan. The history of Tara dates back to 2000 BC making it one of the most magical places in Ireland, if not the whole of Europe.

The Banqueting Hall (not an actual hall) would have been the ceremonial entrance to the Hill of Tara and aligned to that is the mound of the hostages (read more about Niall & the Nine Hostages). This mound is the oldest section of Tara and is aligned with the sunset during the ancient Celtic festivals of Samhain and Imbolc. The Rath of the Synods sits between the mound of the hostages and the Banqueting Hall and after a number of excavations, many Roman artifacts had been found dating between the 1st & 3rd centuries.

Other monuments include the Fort of the Kings, a circular Iron Age hill fort. Cormac’s House (Teach Chormaic) and the Royal Seat (Forradh) which are two ring forts within that are linked.

The Stone of Destiny

A standing stone is located in the middle of the Royal seat and is known as the Stone of Destiny. Its often suggested this is the Lia Fáil (stone of Ireland) brought to Ireland by the Tuatha Dé Danann but this is disputed.

The Lia Fáil at Tara was used for the inauguration of the High Kings in Ireland but it was described as flat in shape so the Kings could stand upon it. The current Stone of Destiny doesn’t match the shape of typical inauguration stones used elsewhere in Ireland and Scotland so it could simply be a Standing Stone or a boundary marker.

There are suggestions the Lia Fáil was removed from the Hill of Tara and moved to Scotland, this was known as the Stone of Scone.

The Fort of King Laoghaire is located south from the Royal enclosure and this is where the king of Ireland would have been buried. It is believed he was buried in an upright position to see any enemies or grave robbers coming.

There are over 30 monuments around the Hill of Tara with many more no longer visible, this was a very special place for the Celts who settled in Ireland. Standing on the hill not far from Tara are other special places such as Newgrange passage Tomb and the Hill of Slane can also be seen giving a great sense of the history of the Irish and Celtic Culture.