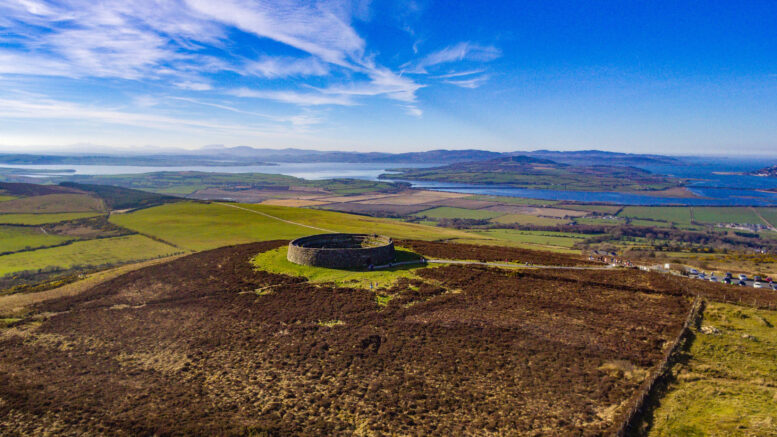 Grianán of Aileach is a stone ringfort located in County Donegal. Measuring 23 meters in diameter its walls are 3.9meters thick and 5 meters high, making it the largest stone fort in Donegal. Grianán, as it’s known locally, was the royal fort of the Kingdom of Aileach between the 5th century to 12th century AD

The ringfort of Grianán is believed to be built on the site of an early Iron Age hillfort. Located between Lough Swilly and Lough Foyle, it has a spectacular 360 view of the Irish countryside. On a clear day, visitors can view for miles into county Donegal, County Derry, and County Tyrone.

History of Grianán of Aileach

When Claudius Ptolemy, the Greek geographer, compiled the 2nd-century Geographia atlas, he marked Regia in the northern part of Ireland. Some scholars believe Regia, translated as the city of Kings, was Grianán of Aileach.

Medieval Manuscript compiled in Ireland gives us insight into how important Ailech was. Entries in Annals of Ulster, spanning from 431 AD to 1540 AD, has multiple mentioned of Ailech and its kings.

Áed, king of Ailech, the king of greatest prowess in his time, gave battle to the fleet of the Gall-Gaedil (that is, they are Irish, and fosterchildren of the Norse, and sometimes they are even called Norsemen). Áed defeated them, and slaughtered the Gall-Gaedil, and Áed brought many heads away with him. And the Irish deserved that killing, for as the Norwegians acted, so they also acted.

In 904 AD the Vikings returned and plundered Grianán of Aileach. They returned 35 years later, sacked Ailech and kidnapped the king.

The stone fort was destroyed when the King of Munster invaded 1101, leaving it in ruin. It wasn’t until the 1870’s when a decision was made to reconstruct this ancient heritage site.

In 1870 excavations at Grianán several artefacts were uncovered. Some of the pieces found included, a possible sundial made from wood, warrior clubs, sling-stones, and a chequered stone slab that was possibly used for a game. Other items included an Iron ring, coins, beads, and animal bones.

Grianán of Aileach in Irish Mythology

When Tuatha Dé Danann invaded Ireland, before the arrival of the Celts, they built stone forts on top of hills. According to Irish mythology, the Tuatha worshipped the Dagda, the good god. To honor his dead son, Dagda ordered the construction of the stone fort at Aileach that was to serve as a burial monument.

Other legends state St Patrick visited the site during his pilgrimage in Ireland in the 5th century. Its believed he baptised a local chieftain by the name of Eoghan (Owen). The area known as Inis Eoghain (island of Eoghan) was named after this chieftain.

The stone fort is located near the N13, between Letterkenny and the city of Derry. Approaching from Letterkenny, pass An Grianan Hotel and turn right at Burt junction. Follow the road signs along the road climbing the hill until you reach the car park, the fort will be visible from here. Unfortunately, there are no amenities at the site and it’s not wheelchair friendly.