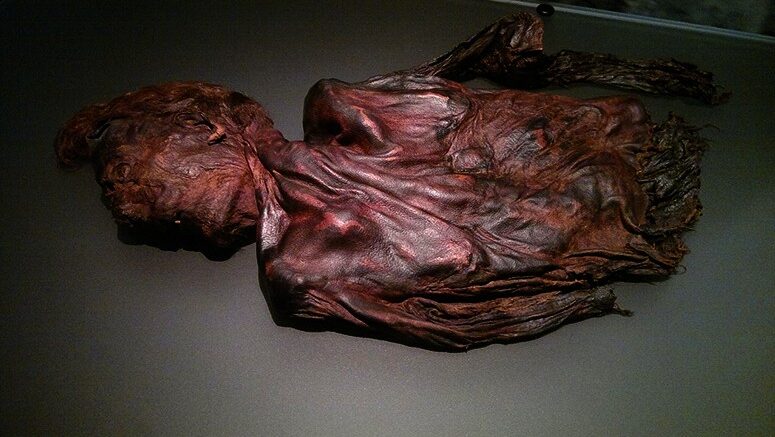 In March 2003 a body was found by Peat cutters in a bog in Clonycavan, County Meath. The gruesome discovery gave us an insight into how the Clonycavan man was murdered over 2,000 years ago.

The Clonycavan man, as he became known as, is one of several bog bodies discovered in Ireland. The bog bodies are usually well preserved due to the conditions beneath the peat bogs where they are mostly found.

Who was the Clonycavan Man

After examination by the National Museum of Ireland and a team of international specialists, it was discovered the Clonycavan Man was from the Iron Age Period. Radiocarbon dated his death to be between 392 BC and 201 BC.

He was a small man, measuring 5ft 2 in height, and had a distinctive hairstyle. Spiked so the hair stood on-top he used a gel made from vegetable plant oil mixed with a resin. After testing the resin investigators found it came from a pine tree not native to Ireland but from a tree only grown in Spain and southern France. Other tests on his hair showed his diet was rich in protein in the months leading up to his death.

The brutal death of Clonycavan Man

After forensic examination by the Garda Technical Bureau, it was discovered the Clonycavan Man was murdered. He was in his early twenties at the time of his death which most likely occurred during the summer months. His nose was broken and he had a large wound from the nose to under his right eye which was likely made by an ax. A deep wound on the top of his head, where parts of his brain were found, shows his skull was split opened by the same sharp object.

Why was the Clonycavan Man killed?

There are different theories to why the Clonycavan Man may have been murdered but the evidence from the forensic examinations suggests he was wealthy and of importance. Historians believe he was of Celtic Upper Class.

Ned Kelly, of the National Museum of Ireland, suggests it may have been part of the ritual known as the triple killing of kings. This was when a King in Ireland would meet a gruesome death and who would be killed three times over such as by strangulation, drowning, and bludgeoning. Other bog bodies discovered in Ireland also suggest the same theory.

Whatever the reason for the murder of the Clonycavan Man his discovery gives us an intriguing insight into rituals in Ireland during the Iron Age Period.