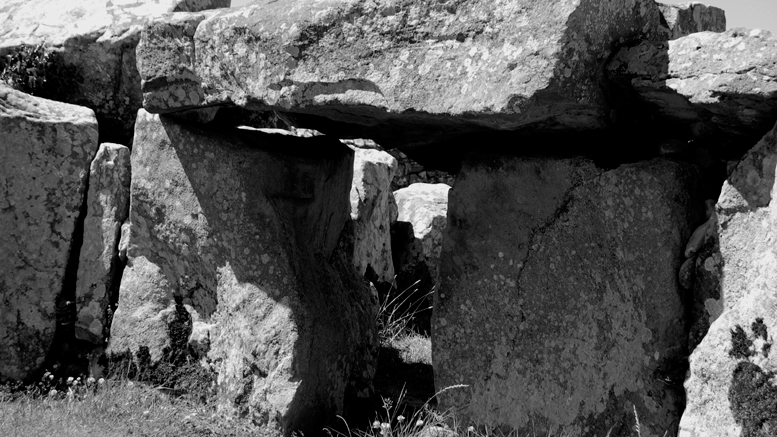 Creevykeel Court Cairn was built during the Bronze Age period in Ireland and is located in today’s County Sligo. It’s a massive ancient monument that has been somewhat restored since being first recorded as antiquity in 1909. It was recorded to have three ancient graves but only of these remain, so its original size was a lot bigger than what we see today.

As you approach the Cairn it’s easy to see its trapezoidal shape with its entrance at the backside of the site (facing south). The entrance to the Cairn is approx 1m wide and 4 meters long and would have been originally roofed with other stones.

As you enter the center court of the Cairn you’ll notice the sides that make the court circle are made of large stones of various sizes. Directly in front, at the middle, is an entrance to a gallery that is held up with two large jamb stones. The gallery is divided into two chambers with another two large jamb stones separating them.

The site itself is impressive but as it was used over a period of time the original structure has long disappeared. The site was also used be during the early Christian period for smelting Iron and the pit still remains in the middle of the central court of the cairn.

Little evidence has been in terms of burials at the site except for small pieces of cremated bones. However, Neolithic pottery, Bronze Age pottery and stone tools, and clay bones have been found at the site.

How to get to Creevykeel Court Cairn

Creevykeel is located on the main Sligo to Bundoran road (N15). It is very well signposted with a large car park. A number of small steps lead up to the main court cairn site.