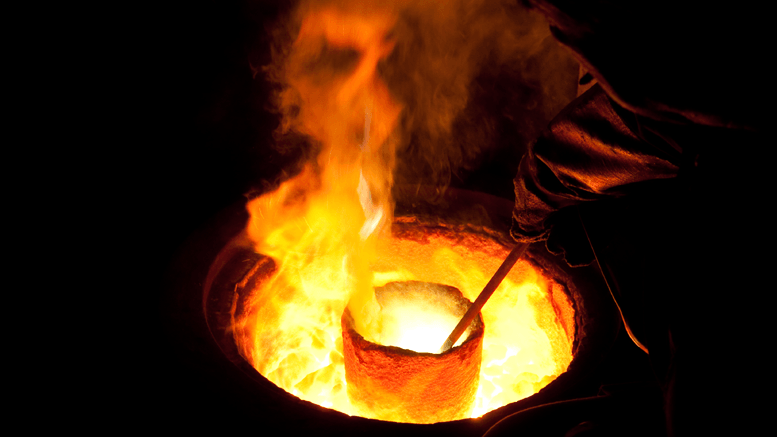 The Bronze Age period in Ireland dates from around 2500 BC when copper and gold were being mined and smelted.

Copper was used for utensils, tools, and also for adornment. When mixed with tin the resultant alloy is bronze, a much harder material than pure copper and thereby more useful for use in weaponry.

Finds of Bronze-age weapons include daggers, halberds, spearheads, and flat axes. The ax heads were sometimes decorated spirals or zigzagging and have been found in places such as Britain and Scandinavia. The axes are heavy and this is an indication that copper was in good supply in Ireland.

The total weight of copper and bronze artifacts found the amount to around 750 kilograms but it is estimated that a mine in County Cork, at Mount Gabriel, turned out 370 tonnes. The oldest known copper mine in Northwest Europe is said to be at Ross Island in County Kerry.

Later in the period bronze would also be used to produce musical horns and to date 104 such horns are known in existence today.

The Bronze-age is marked by a large number of hoards that have been found throughout Ireland.

There is the Ballinesker hoard found in County Wexford in 1990 and dates from the 8th century BC. The Dowris Hoard from near Birr in County Offaly was found in 1830s and dates between 7th and 9th centuries BC.  This hoard includes swords, spearheads axes, horns, crotals buckets, and a cauldron.

Many crescent-shaped lunula’s made of hammered gold sheets and which fit around the neck have also been discovered. Out of 100 found in Europe, 80 of them were in Ireland. The decorations on the lunula usually consist of concentric rows of dots, zigzags, crosses, and triangles and are similar to the decorations found on pottery and flat axes.

Other finds included armbands, necklaces, ear-rings, ear spools, bracelets and lock rings made for the hair and made from fine gold wire.

Many of the hoards include gold and bronze artifacts with glass, faience and amber beads. Indeed the hoards can contain a great number of different objects from weapons to musical instruments to jewelry.

We have to ask ourselves why such hoards have been placed where they were? Many of the larger ones were probably an accumulation of objects gathered over a long period of time perhaps as a votive offering or hidden in times of strife. Others were obviously personal belongings either lost or placed as an offering to a god. As most of these hoards were found in bogs or wetlands it probably signifies sites of spiritual importance.

Another development of the Irish bronze age was the move away from the massive megalithic graves such as Newgrange Passage Tomb. Wedge tombs were appearing.

The wedge tomb is a simple stone-lined narrowing chamber with a capstone and the whole then covered over with a mound. Normally they don’t measure more than 1.5 meters in height and though found in many parts of Ireland they are more numerous in the uplands of Munster, Connaught, and West Ulster. They are usually associated with the people who worked with bronze production and are almost always face the southwest.

Another type of grave that puts in an appearance at this time is the Cist Grave. This is a simple grave for an individual.

Most cists, on average measure internally about 80cms long and 50cms wide and may contain cremated bones or disarticulated bones. Sometimes the remains are whole and seem to have been bound up before internment. However more elaborate stone-lined cists have been found, for instance at Keenoge in County Meath. They are found mostly in Ulster and Leinster and many of them are buried in cairns such as the Creevykeel Court Cairn that had been used over many generations.

Stone circles, standing stones and ring forts are other features of the Bronze-age.

The stone circles are thought to have been either astronomical sites or ritualistic sites, such as Beltany Stone Circle.  They can have very tall stones or quite small ones, the circle can be singular or multiple. They are to be found mostly in Ulster or in Munster.

Ring forts can be found all over the country and outstanding examples are Dun Aengus on Inishmore island and the Grianan of Aileach which stands guard on a hill in Donegal overlooking the Foyle and Lough Swilly. Many but not all ring forts have associated souterrain or underground rooms.

Standing stones are solitary stones that vary in shape and size. Again they are found all over the island with some of them decorated or with Ogam writing as a memorial to someone special. Most however are bare of any inscription and the reason for them can only be guessed at. Local people usually have a familiar name for them.

The one which stands at Tara is called the Lia Fáil or The Stone of Destiny. The supposed coronation stone of the High King of Ireland legend has it that if the rightful king of Ireland should touch it, it will call out. Recently there was public outrage when vandals attacked it with a hammer.

The Hill of Tara