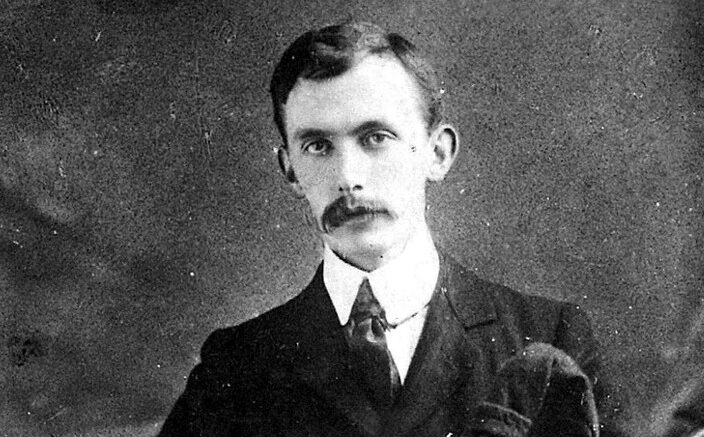 Éamonn Ceannt was a leading Irish nationalist who helped with the revival of the Irish culture and also became involved with the planning of the 1916 Easter Uprising. He was one of the 7 signatures of the Proclamation of Independence from Britain.

Edward Thomas Kent (Éamonn Ceannt) was born, the sixth of seven children, in Ballymoe, County Galway in 1881. His father, James, was an officer in the Royal Irish Constabulary. His mother was Joanne Galway. The family moved to Dublin when James retired from the R.I.C. They were Roman Catholics and the 1901 Census of Ireland reports them as bi-lingual, speakers of both English and Irish.

Éamonn Ceannt and the Gaelic League

Edward, or as he preferred to be known as, Eamonn, was dedicated to reviving the culture, language, and music of Ireland and this was to lead him into joining the Gaelic League in 1899. The following year he, along with Edward Martyn, founded Cumann na bPíobairí (a piper club). Such was his talent that in 1908 he was invited to play before Pope Pius X. He was in Rome at the time with a group of Irish athletes celebrating the pontiff’s jubilee.

Besides meeting many of the leading nationalists of the day through being a member of the Gaelic League, he also met his future wife Frances Mary O’ Brennan, more usually known as Áine. The couple were married in 1905 and their first child Ronan was born in 1906. That same year Eamonn won a gold medal at the Oireachtas, a major Irish cultural event.

A fight for Irish independence

As someone interested in all the cultural aspects of his country, it is perhaps inevitable that his interest would also lead him into the politics of Irish independence from Britain. He found a vehicle for his political ideals in the ranks of the Irish Republican Brotherhood and Sinn Féin and was a founding member of the Irish Volunteers in 1913.

The Irish Volunteers were an amalgam of various groups looking to gain Home Rule for Ireland. In 1914 Ceannt was a participant in the Howth gun-running episode when German rifles were smuggled into the small fishing village just outside the capital.

When Britain went to war with Germany in 1914, the Irish Volunteers split into two factions. One side following John Redmond believed Britain would grant Home to Ireland if they volunteered to fight against the Germans and the other side didn’t believe, Ceannt would be one of the latter members and in 1915 he was appointed the 9director of communications.

On the morning of the planned 1916 Easter Rising a Proclamation of Independence from Britain was to be read out from the steps of the General Post Office in Dublin. Éamonn Ceannt was one of the signatures of the proclamation and was appointed Commander of the 4th Battalion with Cathal Brugha as his second in command taking up positions in the South Dublin Union.

The Union, a vast sprawling medical complex, witnessed some of the fiercest fightings of the rebellion. Three regiments of the British Army, the Derbyshires, the Sherwood Foresters, and the Royal Irish Regiment were involved in the retaking of the Union. They lost many officers and men. The battle lasted for forty-eight hours and casualties were high on both sides. Cathal Brugha was so badly wounded that the British released him believing he would not survive his wounds. Ceannt surrendered only when Padraig Pearse issued a general order that all fighting was to stop.

The execution of Éamonn Ceannt

Éamonn Ceannt was arrested by British forces and incarcerated in Kilmainham Gaol along with the other Uprising leaders. On the 3rd and 4th of May 1916, he was court marshaled by a military court, found guilty, and sentenced to death by firing squad. This was confirmed by General Sir John Maxwell and the sentence was carried out on the 8th of May in the former stone breakers yard at Kilmainham Gaol. He was later interred at Arbour Lane Cemetery.

Robert Emmet and the Rising of 1803