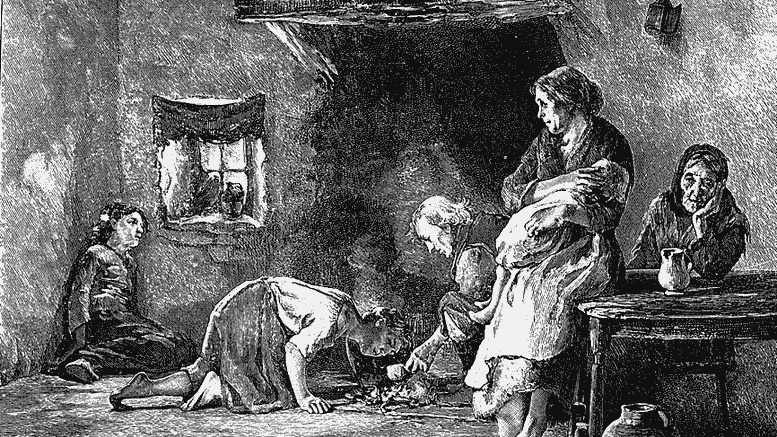 Between the years of 1845 and 1852  famines struck Ireland along with disease that would leave 1,00,000 Irish people dead and just as many leaving the country.

In late 1845 a fungal disease was found in potatoes and because potatoes were the main source of food in Ireland the fungal would prove to a major problem for the natives. The fist fungal attack didn’t have a serious effect on the island but the year following total potatoes crops was wiped out. Another fungal attack occurred in 1848 and in 1849 making the already existing problem worse.

The decline of Ireland’s population

During the period of 1845 -51 the Irish population declined with many dying from hunger or disease and others escaping by fleeing Ireland to places such as Britain, Canada and the U.S – known as the great Diaspora of Ireland. Ever since the famine, the Irish population has never climbed to be as high as it was before the famine. In 1841 there were approx 8 million people and today there are only approx 4.2 million.

Potatoes were not the only crop grown in Ireland as the land was very rich for agriculture. Most other crops grown were exported to Britain, even though the famines that occurred.

Not all people in Ireland suffered directly from the famine. The more serious impacts of famine were seen in the more remote parts of the country where families relied on the potatoes crop in order to survive.

The Cause of Ireland’s Potato famine

When the famine in Ireland occurred opinions were different on its causes, even today it still remains disputed. The British blamed the Irish by saying there was too many on the island and the agriculture was insufficient for the size of the population. On the other hand, many people blamed Britain for the famine or at least the starvation & death that followed. Some seen Britain as the ruler of Ireland and that it was their job to ensure the country was properly ruled.

Many historians put blame down to many different factors such as the potato becoming the main source of food for many families. They also believe that the land divided up for families to grow crops was too small and insufficient for any family to survive. These are just a few of the many factors that may have caused Irelands to shrink to such a low population.