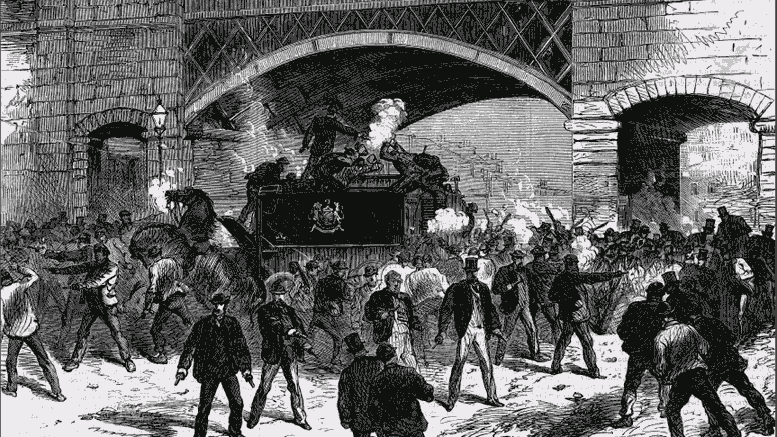 The Fenian Rebellion of 1867 was a result of failed attempts to invade Canada by the Irish-American branches of The Fenian Brotherhood, the movement there was severely split between the supporters of Colonel John Roberts and those of John O’ Mahoney. Just as Roberts had failed in his attempt to invade Canada at Fort Erie, O’ Mahoney had to abort a raid on Campo Bello island in New Brunswick.

The Fenians in the United States

In Dublin, the Fenian leader, James Stephens, on the run from the British authorities after a dramatic prison break, decided that he would go to the United States and try to repair the rift in the movement. He had already brokered a peace within the movement in Ireland between those who wanted an immediate rising and those who felt that the time was not right.

The more militant section of the movement, led by John Devoy (himself arrested in Feb 1866) and the Irish American organizers and trainers had infiltrated the garrison troops to the extent that one-third of them had taken the Fenian Oath. Added to them there were another 200,000 sworn Fenians within the country. However, of these only about 40,000 would have been adequately armed.

In America, Stephens promised the Fenians that a rising would definitely take place before the year was out. However, he was prevaricating again and as a result of this, he was deposed as the overall leader of the Brotherhood. Colonel T. J. Kelly, head of the military council of the movement became Acting Chief Executive of the Irish Republic. Kelly immediately began to prepare for a rising. He and Capt. John McCafferty, an American born veteran of the Confederate army with a force of officers set sail for Ireland in January 1867. Kelly’s military command was headed by a French military adventurer called Cluseret.

The provisional government of Ireland

Cluseret and Kelly went on to London where they established a provisional government of the Irish Republic. Their plan was to initiate a guerrilla war in Ireland immediately. Captain Mc Cafferty planned to capture the large British arsenal in the northern English town of Chester on 11th February. His troops were to capture trains running between the town and the mail port of Holyhead in Angelsey. Here they also planned to capture the mail boat and use it to transport the weapons to Ireland where a Fenian Rebellion would take place simultaneously. The Fenians began to gather in Chester but McCafferty had to call off the plan when he learned that he had been betrayed by an informer. In Ireland, the rebellion was also called off. McCafferty was picked up a couple of days later when he returned to Dublin in a collier.

The Provisional Government next set March 5th as a new date for the Fenian Rebellion. On March 4th, 1867 The Times received a proclamation from The Provisional Government of The Irish Republic which called for the founding of a republic based on universal suffrage. On the same day, in Ireland, the senior commander of the Fenian forces, General Massey, was arrested in Cork, betrayed by the same informer who had betrayed McCafferty. This man, a well trusted Fenian named J.J. Corydon had been working for the British all along. Along with Massey, the British had captured the plans of the rising.

The failure of the Fenian Rebellion

Unaware that their commander had been taken, the rank and file continued their rising in Dublin, Drogheda, Cork and in the southwestern counties Many of these men were not able to maintain discipline but there was some fighting in Killmallock in Limerick in which two rebels were killed. In the same county at Ardagh, the rebels failed to take the police barracks. In Cork, the Fenian’s had more luck when they took the barracks at Ballyknockane. They also were able to disrupt the rail and telegraph lines and relieve the coastguard station in Knockadoon of its armory.

The Fenian Rebellion was to fail as the troops on the ground had no high command to give them direction. When he heard that Massey was imprisoned, the military commander Cluseret fled to France. Then severe snow storms struck and that combined with the British performing mopping up operations the rebellion was a failure.

In London Kelly was still calling for aid from America and in answer to his call a privateer, Erin’s Hope was fitted out and sailed from New York the following month carrying three cannon and 5,000 modern rifles with a million and a half rounds of ammunition. It made two attempts to land, in Sligo and in near Dungarvan. Some officers were able to land but the ship sailed back to New York. The officers were later captured. The Fenian Rebellion was over.