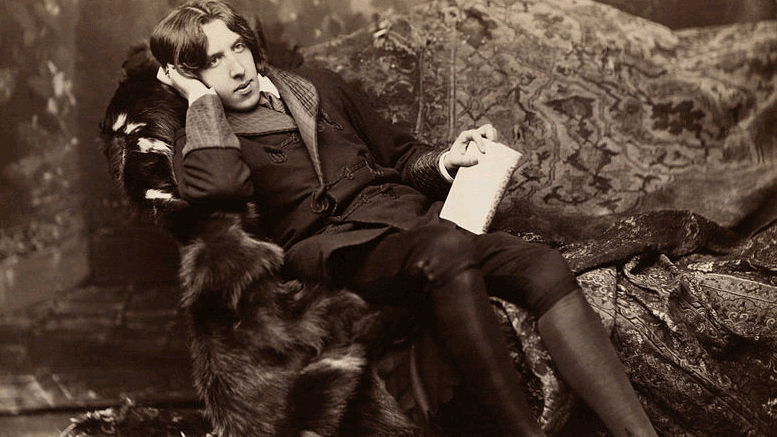 Wilde, born in Westland Row in Dublin, was the middle child of Sir William Wilde, a successful eye and ear surgeon, and his wife Jane Francesca, an Irish nationalist who wrote poetry under the pseudonym of Speranza (Italian for Hope). She was a great admirer of the revolutionary Young Ireland movement.

The young Oscar was educated at home until he was nine years old and became fluent in French and German. He was then installed in Portora Royal School in Enniskillen where he obtained a royal scholarship which gave him entry to Trinity College in 1874.

Wilde read classics until 1874. In his first year he came first in his class, in his second year he won a scholarship in a competitive examination, and in his third-year finals, he won the Berkeley Gold Medal which was Trinity’s highest award for Greek. He then went on to win a demyship, a scholarship particular to Magdalen College Oxford.

Oscar was to remain at Magdalen until 1878 and during his time there he joined the Freemasons reaching the grade of Mastermason. He also developed a keen interest in Catholicism, reading the writings of Cardinal Newman and taking instruction at Brompton Oratory, and even obtained an audience with Pope Pius lX in 1877. However, Oscar balked at being baptized into the Church but kept up a life- long interest in its dogmas. Wilde graduated in 1878 taking a double first in his BA of Classical Moderations and Literae Humaniores. He also that year won the Newdigate Prize with his poem Ravenna.

The Work of Wilde

Wilde returned to Ireland for a short period in 1878 but then went back to London. He was only ever to make two more short trips back to Ireland. He had a small inheritance from his father who had died in 1876, and this he supplemented by writing poems giving lectures in London and Paris. His book Poems sold out on the first print but was voted as plagiarism by the Oxford Union. He was also lambasted by Punch which said of him “the poet is Wilde but the poetry’s tame”. In 1882 Wilde went on a lecture circuit of America. It was such a financial success that it was extended from 4 months to a year duration.

In 1884, during one of his short visits to Dublin Wilde ran into Constance Lloyd whom he had first met in London in 1881. He proposed to her and they married in London in May. She had a yearly stipend of £250 from her father Harold, a wealthy Queens Counsel. The couple went on to have two sons, Cyril and Vyvyan. In the next few years, Oscar supported his family by writing prose for magazines and newspapers along with his poetry and plays. In 1888 Oscar was also to write in defense of Charles Stewart Parnell who had been falsely accused of complicity in the Phoenix Park murders (1882) of Lord Frederick Cavendish Chief Secretary of Ireland and the Permanent Under-Secretary for Ireland T.H.Burke. Parnell was libeled by the Times.

The persecution of Oscar Wilde

In 1891 Wilde met Alfred Douglas who was the flamboyant son of the Marquis of Queensbury. Almost immediately Wild and Douglas began a love affair. Queensbury suspected what was going on and openly threatened Wilde, warning him to keep away from his son. He left his calling card at Wilde’s club addressed as “for Oscar Wilde posing sodomite”. Oscar, encouraged by Douglas, counter-attacked by taking out a private prosecution against Queensbury who was arrested and charged with libel.

Queensbury took to hiring private detectives to prove that Wilde was involved in homosexual affairs and procurement of young men for sex. Queensbury, who was the accused in the case, had to prove that he was not guilty of libel and to defend him in court he hired the Dublin lawyer Edward Carson QC. Wilde was represented by Sir Edward George Clarke. Carson was very adept at portraying Wilde as a decadent who lavished young men with gifts in return for sexual favors to such an extent that Wilde was forced to drop his prosecution against Queensbury.

The Marquis was found not guilty of libel and acquitted. Immediately after the trial, a summons was issued against Wilde on the grounds of sodomy and gross indecency. His friends advised him to flee to Paris but his mother instructed him to stand and fight, like a man. Stay he did and was subsequently charged with gross indecency. Whilst on remand Alfred Douglas visited Oscar daily and only left for France at Wilde’s insistence. At this time too, many of Oscar’s other close friends fled the country. Because of the press hysteria around the trial, even Edward Carson tried to get the courts to let up on his prosecution. Found guilty Wilde was sentenced to two years of hard labor.

During his imprisonment, his health began to fail. He also took the time to write Alfred Douglas an epistle entitled De Profundis which was not fully published until 1962. He was released from prison in May 1897. He maintained his writing and produced letters describing life in jail and calling for the reform of the prison system. He also produced The Ballad of Reading Gaol.

His wife Constance kept him supplied with money but steadfastly refused him permission to see his sons. In 1897 he reunited with Douglas but both their families disapproved and threatened to cut off their funds. Oscar then went on to Paris where he stayed in a run-down hotel and spent most of his time wandering the boulevards.

In 1900 he developed meningitis and in November he died. During his illness, he was at last received into the Catholic Church. At his deathbed was his friend Robbie Ross. He is buried in Père Lachaise cemetery in Paris.