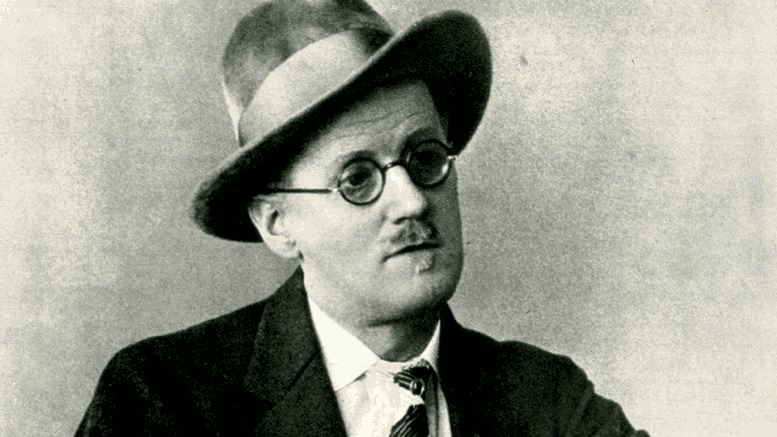 Ireland has always produced poets and writers of renown but premier amongst them has to be James Augustus Aloysius Joyce, a modernist writer who is thought to be the first to develop the “ stream of consciousness “ style.

The young Joyce was born into a middle-class family which lived in Brighton Square in the Dublin suburb of Rathgar but at the age of 6, he was sent to boarding school at Clongowes Wood College, an institution run by the Jesuit order. Later he was to attend Belvedere College and then graduated in 1903, in English, French and Italian, from University College Dublin at the age of 20. During these years, the family fortunes were in decline and due to the fecklessness of his Cork-born father John, they are thought to have had changed addresses as many as 16 times. Also during these years as the young Joyce was growing up, he became disenchanted by the Catholic Church. This was to remain with him all his life although many have said that he never in his heart left the Church.

At the age of 9, Joyce had his first publication. It was a broadsheet poem entitled “ et tu Healy? ” Written at the death of Charles Stewart Parnell, it was an attack on the Catholic Church and Cork MP Tim Healy for their atrocious treatment of the great patriot. Joyce’s father John forwarded the poem to the Vatican library. It is thought that no copies of this poem are known to have survived. Joyce’s brother remembers that the poem was written when the family resided at Blackrock.

After graduation, Joyce went to Paris but was recalled when his mother fell ill with cancer. After she died Joyce started to drink heavily and at this time he met Nora Barnacle, a Galway woman who was to be his life partner and mother of his children. They would not marry until 1931. He also fell in with Oliver St. John Gogarty with whom he was to have a drunken altercation. Gogarty pulled a gun and fired it over Joyce’s head. After this, Joyce would take Nora into exile on the continent and they only ever returned to Ireland for visits.

They ended up in Trieste where he would teach English. They lived there for ten years and during that time he would rewrite a novel that had been rejected for publication in Dublin. It was “ A Portrait of the Artist as a Young Man” which is based upon his own life.  Here too were born George (1905) and Lucia (1907) his children.

Amongst other works he produced, In 1907 he had a book of lyrical poetry, “Chamber Music ‘’ (the sound of urine hitting the sides of a chamber pot) published. In 1914 Joyce succeeded in having his work, “Dubliners” published. It is a set of autobiographical stories set in Dublin. 1918 saw the first showing, in Munich, of his play “ Exiles “. This was a reflection upon the relationship between a husband and wife.

In 1922, “Ulysses” was published. This is set around life in Dublin on a particular day, 16th June 1914 the date that he had first met Nora. It is considered to be his greatest work by many and was censored in America and Ireland as being obscene and blasphemous. His final book, “Finnegans Wake”, published in 1922. It is regarded as the most obscure and difficult to understand of all his works.

In 1940 fled Nazism and spent the war years in Zurich. Here he died in 1941 after he suffered a perforated ulcer. His grave is in Fluntern cemetery in the Zurichberg district of the city. At the time of his death, there were representatives of the Irish Government in Switzerland but they did not attend his funeral service. In later years his widow Nora offered to have his remains brought home to Dublin but that too was declined by the Irish Government.