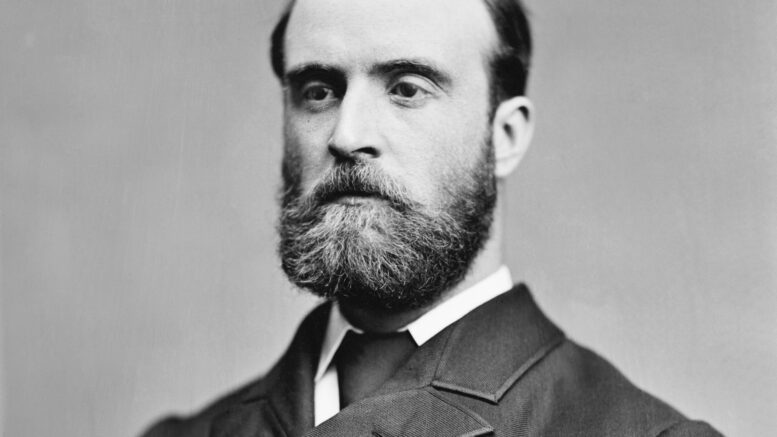 Charles Stewart Parnell, born in 1846 into the Irish Ascendency, was the son of John H. Parnell, an Anglo Irish aristocrat and his American wife Delia who was descended from the House of Tudor. Charles was educated in several schools in England though he never gained a degree.

In 1874 Parnell was appointed High Sheriff of Wicklow and around this time he became involved in Isaac Butt’s campaign for Home Rule. Due to his position as High Sheriff, he was disqualified from standing as a Home Rule candidate for Wicklow and again in 1874 as a candidate for Dublin in a by-election. His chance to enter parliament came however in 1875 when he was backed by the Fenian leader Patrick Egan and won a by-election for County Meath.

Parnell first started to become noticed in 1876 when he declared in Parliament that he did not believe that the Fenians had committed murder when they shot police sergeant Brett in Manchester at the event which led to the freeing of Kelly and Deasy and ultimately the hanging of the Manchester Martyrs. From this point on he began to involve himself in the more radical wing of the Home Rule League. He involved himself in the obstruction of parliamentary business alongside committed Fenians and IRB supporters, Joseph Biggar, MP for Cavan, John O’ Connor Power MP for Mayo, Edmund Dwyer-Grey MP for Tipperary and Frank O’ Donnell MP for Dungarvan.

Parnell made a big impression on the old Fenian leadership including Michael Davitt, recently released from prison and John Devoy, the leader of the American Clan na Gael organization. In 1879, Davitt founded the Irish National Land League and Parnell was elected its president. In the meantime, agrarian unrest within Ireland was on the increase. As evictions began to increase so too did resistance by tenant farmers. There was potato blight in the land again and 1879 was the wettest and coldest since records began.

Parnell recognized that if the peasantry were to take matters into their own hands it would prove disastrous for his party. He, therefore, began to channel their anger. At a gathering of over ten thousand people outside Westport in June, he instructed them,

you must show the landlords that you intend to keep a firm grip on your homesteads and lands. You must not allow yourselves to be dispossessed as you were dispossessed in 1847.

The poor began to join the Land League and as they were to become more organized they began to launch what was to become known as the Land War. From 1879 to 1883 violence, intimidation and revenge attacks all escalated. Landlords and their supporters were “boycotted” and isolated from the community. The country was sliding into anarchy.

The quest for famine relief

In December 1879, Parnell and John Dillon left to tour the USA and Canada in order to gather money for famine relief in Ireland. During this tour, he met with the American President R. B. Hayes and also addressed the House of Representatives upon the state of Ireland. It is reported that he spoke in over 60 cities. On his return to Ireland in 1880 he fought for and won three seats, Cork city, Mayo and Meath, in a general election. Home Rulers won a total of 63 seats and as many as one-third of these were Parnell supporters. During this election, the Liberal party ousted the Conservatives thereby giving William Gladstone a second run as Prime Minister.

The arrest of Charles Stewart Parnell

In response to the Land War, the government, through the office of the Irish Chief Secretary introduced coercive measures which included the granting of special powers to the military and the police. Parnell and other members of parliament, with leaders of the Land League, were arrested and thrown into Kilmainham Gaol in Dublin. The country went even deeper into violence and retaliatory actions. It was becoming ungovernable.

In 1882, the Land League leaders were released on a promise that they would call a stop to the unrest and in return, Gladstone promised to protect 100,000 tenants from eviction due to rent arrears. The Irish Chief Secretary, W. Foster resigned in protest and was replaced by Lord Frederick Cavendish. Less than a week after Parnell’s release from prison, Lord Cavendish and his Under-Secretary were stabbed to death whilst watching a polo match in Phoenix Park. This atrocity, caused Parnell to distance himself from the more extreme elements of the Land League and he established The Irish National League which was to concentrate on gaining Home Rule.

In 1886, agrarian violence was on the increase again and in that year Gladstone supported the introduction of a Home Rule Bill. However, the Bill fell as many MPs, even within Gladstone’s own party felt that it would lead to the disintegration of the empire. Within Ireland itself, there was much opposition to the bill, particularly amongst the Protestant community, particularly in Ulster, who believed that it would lead to an unraveling to all that they had won.

In November 1890, Parnell was named as a co-respondent in divorce proceedings brought by Captain Willie O’ Shea against his wife Kitty. Kitty and Parnell had been together since 1886 when she had separated from her husband. Willie had refused to give her a divorce as she was expecting a substantial inheritance. Indeed it is thought that at least two of her children had been fathered by Parnell. There was an immediate reaction from non-conformist churches and in Ireland, individual Catholic Bishops spoke out against him. Gladstone and the Liberals advised Parnell to resign as leader of the Home Rulers until things had blown over. However, Parnell refused and on the 6th of December, the Home Rule party split with 44 members marching off to found a new party. Parnell had 28 who remained loyal. In the end, even his Fenian supporters, such as Davitt, Dillon, O’Brien, and Healy all abandoned him.

In June 1891, Parnell and Kitty O’ Shea were married. He continued to fight but his support was failing in light of a general condemnation by the Catholic bishops. Only one bishop refused to sign. Many priests continued to support him.

Parnell was suffering from Kidney disease and his health was failing. On 6th October 1891, he suffered a heart attack and died at his home in Hove. He is buried in Glasnevin Cemetery in Dublin.