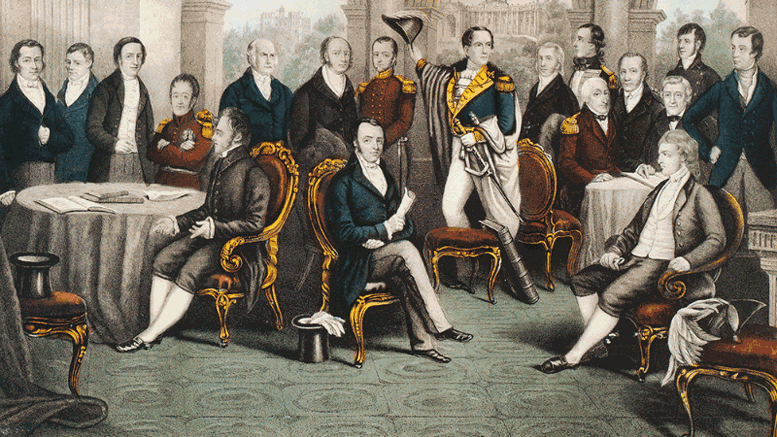 As the 18th century progressed, many members of the Ascendancy Government, in Ireland, began to resent England’s domination over the Kingdom of Ireland. Throughout the century many Presbyterian’s had emigrated to the American colonies seeking a better life and freedom of worship.

As the American colonies erupted in rebellion, even though there was a great support for the colonists in Ireland, and especially in Ulster, Irish soldiers were sent, by the Dublin government to fight on England’s side against the Americans.  This left Ireland poorly protected so when Britain’s old rivals, France and Spain declared war on England in support of the Americans in 1778-9s old rivals, there was the great fear that Ireland could be invaded by those Catholic countries. Many Irish Protestants joined the various volunteer corps which were springing up all over the country.

At the same time, the Irish were raising more and more objections against British interference in trade and governance. They specifically spotted the declaratory act of 1720 which gave Britain the right of legislation over Ireland and Poynings Law of 1495 which limited the powers of the Irish Parliament. These acts were finally removed by 1783 making Ireland an independent but loyal kingdom.

In the meantime, as the population expanded, agriculture improved and industry flourished, there was a group of liberals, The Patriot Party, within the government who sought to lift restrictions from their Catholic and Dissenting countrymen. This party was supported by the now highly politicized Volunteers Corps.

The formation of the Belfast Society of United Irishmen

In 1791 Theobold Wolfe Tone, a Dublin born Protestant barrister put forward “Argument on behalf of the Catholics of Ireland”. This argument interested a group of Belfast Presbyterians who invited Tone and a friend Thomas Russell to Belfast. The result of this meeting, on 14 October 1791, was the formation of the Belfast Society of United Irishmen.

Along with the Catholic Committee, the Society pledged to work for the separation of Church and state. When the Dublin branch was formed on the 9th of November of the same year, the aims of the United Irishmen Society were initially in tune with Henry Grattan and Thomas Burke’s wish for gradual change, however, it soon aligned itself with the more militant agrarian Defenders who were Catholic. This was to give the Society a structure throughout Ireland.

Niall Of The Nine Hostages