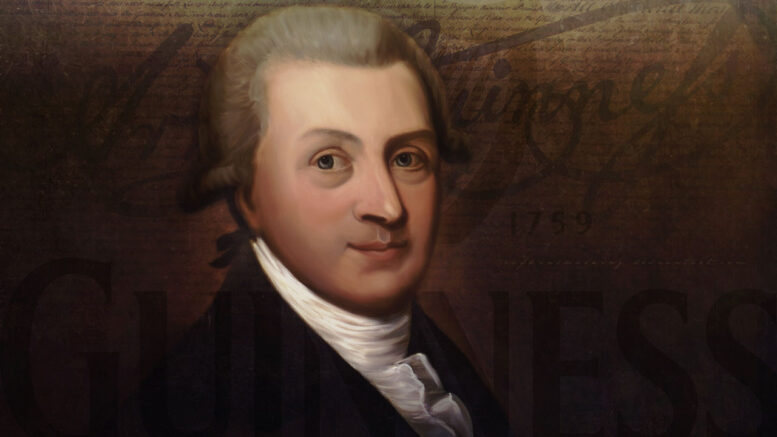 Guinness is thought of as the national drink of Ireland. To many people, worldwide, it is synonymous with Ireland and the Irish. Certainly, in Ireland, it has crossed the sectarian divide, the male/female divide, and the class divide. The Irish consider the drink to have health properties and at times it was not unknown for it to be administered in hospitals as a source of vitamins.

The founder of the Guinness brewery was Arthur Guinness, a son of a land steward who was employed by the Church of Ireland Archbishop of Cashel, Arthur Price. The young Arthur must have made a favorable impression upon the archbishop who, upon his death, bequeathed Guinness £100 in his will. Guinness invested this money in a brewery in Leixlip which business he was in partnership with his brother Richard.

In 1758 Arthur uprooted himself and moved to Dublin where he began brewing beer. He signed a 9,000 lease on St. James’ Gate Brewery for £45 per annum. He business became so successful that by 1766 he was made the master of the Dublin Corporation of Brewers.

In 1761 Arthur Guinness married Olivia Whitmore, a relative of Henry Grattan, and had 21 children to her. Ten of these children survived. Although their marriage was celebrated in St. Mary’s Church, Arthur and Olivia were to establish a bond deep with St. Patrick’s Cathedral in Dublin and this was continued by their descendants.

During the years of unrest in the 1790s, Guinness found himself at odds with the United Irishmen because of his support for the Union with Great Britain. There was the talk of a boycott of Guinness’s black protestant beer.

The success of Guinness

In 1788 Guinness began to produce a darker beer (Porter) and extended his outlets throughout all of Ireland. It is said that during the Napoleonic Wars his sales of Porter were to increase three-fold. This darker beer was so successful that the production of lighter ales was dropped.

By 1830 the Guinness Brewery was the biggest and most successful in Ireland. In 1886, the company, by now the biggest brewery in the world, was floated on the stock market. In modern times the brand is owned by the multi-national company Diageo and the original Dublin plant still produces some 18 million liters daily.

In Ireland, the Guinness family are held in high regard for the charitable works they have done for their employees, the people of Dublin and of Ireland in general. His descendants have been mayors of Dublin, baronets and peers, (Baron Ardilaun and Baron Iveagh).

It is said that the origins of the Guinness family lie in County Down. Recent DNA studies have shown that the family is closely related to a branch of the MacCartin clan, a branch of whom lived at a place called Gion Ais (the wedge-shaped ridge). This is in the barony of Kinelarty.