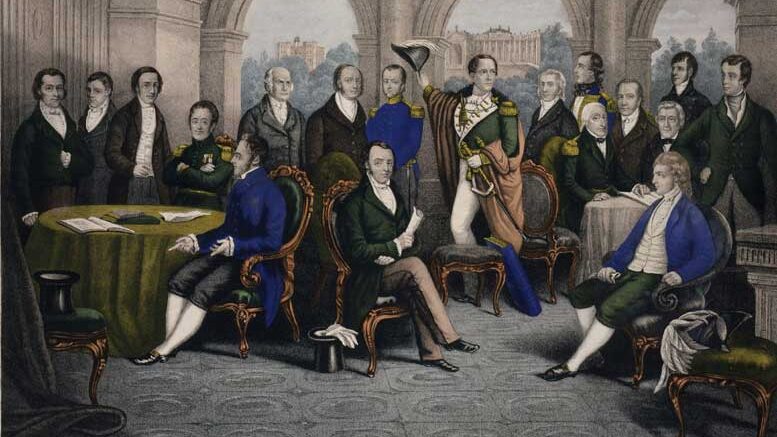 The British government was highly alarmed by the French attempt to invade Ireland in December 1796 and dispatched Lieutenant-General Gerard Lake to the province of Ulster. His remit was the disarmament of the United Irishmen and their Defender allies under an Insurrection Act which effectively put the country under martial law. Lake vowed to subdue the populace of Belfast by the use of terror. Throughout 1797 he initiated searches in Belfast and the surrounding towns, seizing many firearms and pikes. He loosed his Yeomanry and Orange militias upon the countryside, spreading terror by burnings and merciless floggings. This reign of terror was very effectual in depleting the numbers of those supporting the United Irishmen. It became known as the “Dragooning of Ulster”.

In 1798 Gerard Lake was promoted to Commander in chief of the army, in spite of Irish government outrage at the savagery of his troops, and turned his attentions to the province of Leinster. Here his officers delighted in using the pitch cap, half-hanging, and floggings.

Although initially Lake’s regular army units and companies of Yeomanry and Fencibles, were successful in recovering many weapons, his terrorizing of the people of Kildare, Wexford, and Wicklow had an adverse effect. Instead of subduing the people, it drove them, in their thousands into the ranks of the United Irishmen.

The atrocities of the United Irishmen rebellion

The United Irishmen rebellion spread and the ferocity of it were to make it one of the bloodiest affairs in modern Irish history. Both sides committed many bloody atrocities, and countless innocent people were killed in the most savage of means.

In Leinster, the rebels had turned their eyes to revenge at Scullabogue near New Ross when up to 200 loyalists, 20 of whom were Catholic, were shot or burned to death in a byre. This was done in retaliation for the massacre of rebels at New Ross earlier in the day. In Ulster, Jemmy Hope a weaver from Templepatrick in County Antrim, assisted by Henry Joy McCracken, called on the Army of Ulster to rise on the 6th June 1798. That night the town of Larne was filled by United Irishmen who fired upon the Tay Fencibles forcing them to flee to the safety of their barracks. Next day, Ballymena and Randalstown fell to McCracken’s forces but as they advanced into Antrim town which the English commander Major Sneddon, had set on fire, the United Irishmen were heavily defeated. The English had prior knowledge of their plans from an informer. McCracken and Hope fled and on Friday 8th June watched the start of the rebellion in County Down from Collin Mountain above Belfast.

On that day a detachment of United Irishmen attacked and burned the Killinchey home of a family they believed to be informers. The entire household was killed. The next day a force of Newtonards Yeomanry calvary and supported by 270 York Fencibles, attacked the rebels but were beaten off with heavy casualties. This success for the rebels drew them more support from throughout north down.

The army Commander Major-General Nugent issued an order, on the 11th June 1798, that the rebels lay down their arms or he would destroy the towns of Killinchy, Killyleagh, Ballynahinch and Saintfield and also every farmhouse and cottage in the vicinity. That he would carry off all the stock and cattle and put to the sword anyone in arms.

The next day, the 12th June Nugent kept his promise and bombarded the rebel positions. The battle continued to the early morning of the 13th June when the rebels ran out of ammunition. The rebels were hunted down and no quarter was given. Reprisals took place all over Ulster. United Irishmen and women were hanged and imprisoned in their hundreds. McCracken was betrayed by a neighbor in Carrickfergus and because he refused to give up the names of his comrades he was hanged on 17th July.

In Wexford, the rebellion was still being fought. As government forces under General Lake tightened the naught around the United Irishmen, the rebels turned to commit atrocities upon captured loyalists. Although the town of Wexford was in rebel hands their headquarters were centered about Vinegar Hill near the town of Enniscorthy and there were approximately 20,000 insurgents armed mostly with pikes.

General Nugent wanted total victory and rejected any suggestions of rebel surrender. He surrounded the rebel encampment and on the 21st June at 0700hrs he bombarded the United Irishmen’s positions using twenty pieces of artillery. The rebel pike-men held their positions for one hour before breaking and as they fled, Nugent’s force of 10,000 troops attacked them, killing hundreds. The slaughter was horrific with no mercy given. Thousands died on the field and afterward as reprisals were meted out.

The French arrive in Ireland to join the Irish rebellion On  22nd August the second expedition of three French frigates, under the command of General Jean Humbert, sailed into Killala Bay in County Mayo. He landed with a force of 1099 men and having persuaded a large number of Gaelic speaking locals to join him he took the town of Ballina. He then turned towards the town of Castlebar which was held by General Lake with a large force of Militia, Fencibles, and Yeomanry. The French attacked and Lakes force broke and ran. Humbert’s Irish peasant force ran off at the first shot. Humbert took the town and this battle became known as the Castlebar races. After this, the French headed north to Dromahair in County Sligo where he was informed that the United Irishmen were out in rebellion in Westmeath and Longford. He rushed to join them but in September 1798 at Ballinamuck County Longford he was defeated and captured by a much stronger English force. He was treated with great civility but his Irish allies were not.

A French Corvette sailed into Rutland harbor in County Donegal on 16th September carrying United Irishmen leader Napper Tandy. Upon landing, Tandy was informed about the failure of the rebellion. He spent the night getting drunk and sailed off the next day.

Also in Donegal, on the 12 October, a French force of 10 ships sailed into Lough Swilly. It was under the command of Admiral Jean-Batiste Bompart. On the flagship was also Theobold Wolfe Tone. The British were waiting for them and after a fierce sea battle in a strong gale, 7 of the French vessels, including the flagship struck their colors. Wolfe Tone was jailed in Buncrana and then transferred to Dublin. He was tried for treason and condemned to death by hanging. He cut his own throat missing the juggler but severing his windpipe. It took him a week to die. He was allowed to be interred his family grave in Bodenstown, County Kildare.