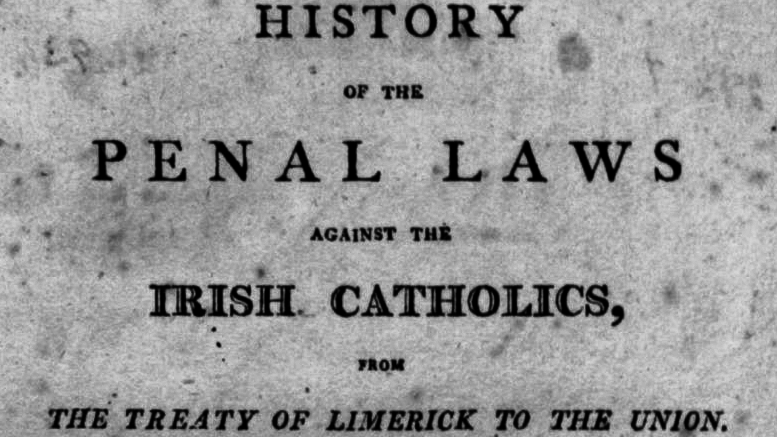 When Limerick fell to the Williamite army in 1691,  the first article of surrender stated that:

The Roman Catholics of this Kingdom shall enjoy such privileges in their exercise of their religion as are consistent with the laws of Ireland, or as they did enjoy in the reign of King Charles the second: and their majesties, as soon as their affairs permit them to summon a parliament in this kingdom, will endeavour to procure the said Roman Catholics such farther security in that particular, as may preserve them from any disturbances upon the account of their said religion

This promise was, of course, dependent upon Catholics taking the oath of loyalty to King William and Queen Mary within the first year of their realm. At first glance, this would seem reasonable as William had conducted his campaign in Ireland with the blessings of his ally, the Pope.

In 1693 however, Papal support switched to King James ll, who was in exile in France. This caused King William to become less tolerant and for Irish Catholics to be less willing to take a loyalty oath. This is highlighted by a bill put forward in the Irish Parliament in 1695 and passed in 1697, outlawing Catholic clergy.

Also, in Ireland, the now totally Protestant parliament was more inclined to impose much harsher punishments upon Catholics and Dissenters and following the death of William in 1702 (Mary died in 1695) they took the opportunity to increase the restrictions against Catholics holding office or land. In this, they were supported by the British Parliament and Queen Anne ll the Protestant daughter of James ll and sister in law of William. She was the last of the Stuart monarchs to sit on the British throne.

The Anti-Catholic Laws in Ireland

The more major of the laws include:

The introduction of the Penal Laws in Ireland would have a serious impact on Irish society and dive Ireland into deeper poverty for years to come.

The establishment of Éire in 1937