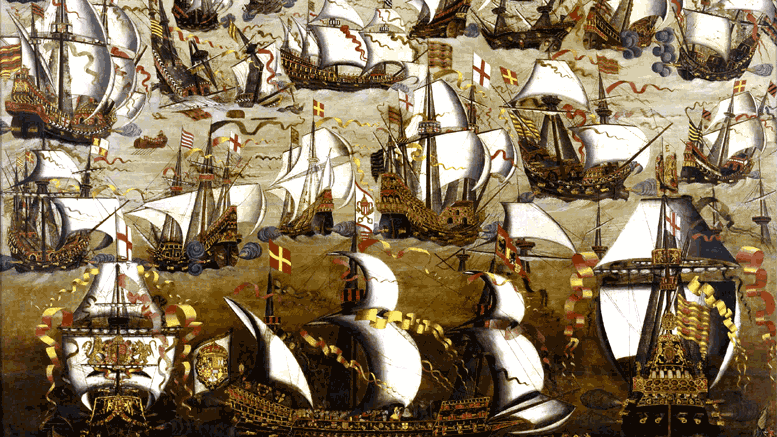 Following the death of James FitzMaurice FitzGerald in August 1579, command of the rebel forces in Munster fell to John of Desmond, his brother. Not long after that, Gerald FitzGerald the Earl of Desmond joined the rebellion.

The holdings of Gerald FitzGerald had been destroyed by the English under Nicholas Malby which caused him to join with John of Desmond. They fought many vicious skirmishes against the English and even managed to sack the town of Youghal.

The English, accompanied by Tom Dubh Butler the Earl of Ormonde with his gallowglasses, in return laid waste to the territory of Desmond. In Dublin and London, there were fears of a Papal invasion of Ireland and they were determined that the rebellion in Munster would not spread. Already they were struggling with the O’ Byrnes and the Leinster clans whilst also fighting back O’ Neill raids out of Ulster.

The arrival of Spanish & Italian forces

The Pope and King Philip of Spain did send reinforcements of Spanish and Italians to reinforce those already encamped at Dún anÓir and they arrived in the summer of 1580 at Smerwick in Kerry, bringing arms and money.

The English had knowledge of the Spanish so Ormonde with The Lord Deputy Grey de Wilton raced to lay siege to Smerwick and by the 5th November, an English naval blockade was established effectively isolating the Papal force from the clans led by John and Gerarld FitzGerald.

At the Siege of Smerwick

The Papal force was caught in a trap at a point on the Dingle Peninsula, hemmed in by the English, the sea and Mount Bandon. They numbered around 700 men whilst the English had a force of around 4,000.

The siege itself did not last very long, only three days. English heavy guns were soon able to breach the defences and the Papal commander Sebastiano Di San Giuseppe sought terms on the 10th October 1580.

Massacres after the Siege of Smerwick

Grey de Wilton was still smarting from a defeat that he had suffered at the hands of Fiach O’ Byrne at the battle of Glenmalure in Wicklow and so was in no mood to be generous.

It is a matter of conjecture as to whether Grey had offered clemency or not, many say that he did and then betrayed his promise, but what is clear is that the entire Papal force, foreign and Irish, men and women, were slaughtered and beheaded. Their heads were thrown into a field now known as Gort na gCinn and the bodies were tossed into the sea.

One of those charged to commit the executions was Sir Walter Raleigh, who like Grey was a survivor of the rout at Glenmalure. Raleigh had also participated in a massacre of MacDonnells on Rathlin Island a few years earlier. It is interesting to note that when he fell foul of King James I one of the charges brought against him was that of the killings at Smerwick.

Another survivor of Glenmalure and participant at the siege of Smerwick was Edmund Spenser the noted English poet and secretary to Lord Grey. He would become an apologist of English cruelty in Ireland by denigrating the Irish people.

The fight for Munster

The FitzGeralds escaped being trapped in Smerwick and continued the fight in Munster for another year but the English and their allies had more firepower and better provisions. A black earth policy was carried out by the English which pushed the province into a terrible famine.

Elizabeth later recalled Grey from Ireland, possibly because of the extreme measures that he was using in Munster. His place was taken by Ormonde. He offered free pardons for those who had rebelled the exception of John and Gerald FitzGerald. They continued to wage a guerrilla war. The Papal Nuncio, Nicholas Sanders died from hunger and cold whilst hiding as a fugitive. John of Desmond was killed in an ambush just north of Cork during the summer of 1582 Gerald FitzGerald, Earl of Desmond was killed on November 1583 by the O’ Moriarty clan when caught stealing their cattle.