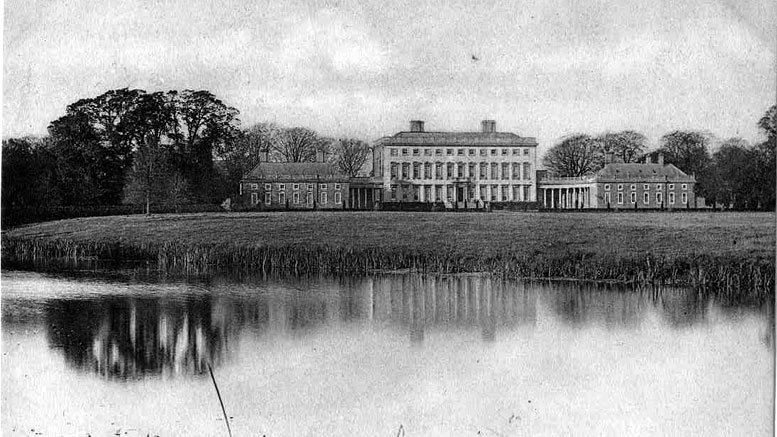 Tales of meetings with the Devil are very common in Ireland, maybe because we have a lot of crossroads here and the Devil seems to like appearing to people at these turns in the road. The ghost of Castletown House is just one of many ghost stories of such encounters.

Many a tale was told by old men, sitting around a turf fire sipping a tot of Irish whiskey, of hoof prints appearing in the snow atop of roofs or of a strange man offering to make a traveller rich beyond his wildest dreams the cost……. the travellers’ soul.

This particular story doesn’t take place at a crossroad but in a stately home in Celbridge County Kildare in the 18th Century.

In Celbridge, there stands a beautiful stately house which was built by William Conolly who was the Speaker of the Irish Parliament in 1722. Conolly has also built the infamous Hellfire Club which was cursed from the beginning.

After the death of Conolly in 1729 his widow, Katherine continued to live there hosting extravagant parties becoming famous for her hospitality.

After her death in 1752, the house passed to their nephew William James Conolly, MP for Ballyshannon, County Donegal. He was married to Lady Anne Wentworth, daughter of the Earl of Stafford. It was to her that the gentleman in question first appeared.

The first appearance of the Castletown House ghost

One day she happened to see a strange tall man standing in the upper gallery he proceeded to walk down a nonexistent staircase taking tiny steps as though the staircase steps were very small. He paused by a large window and started to laugh, a high, mocking, cruel, arrogant laugh that sent chills down Lady Anne’s spine. He looked down upon the stricken lady as though he was the rightful owner of the house and she a lowly servant.

Ten years passed with no more appearances. Conolly expanded on the original house and built a staircase exactly where his wife had previously seen the man.

More than twenty years passed the house was now owned by William and Anne’s son Thomas Conolly and his wife Lady Louisa, who was the great-granddaughter of King Charles the Second of England and Louise de Keroualle.

One fine day Thomas and Lady Louisa went walking in the beautifully landscaped grounds of their stunning home. Thomas was recalling the tale of the strange man to his wife. A few days later on a wild stormy November day, Thomas went out riding with the Kildare Hounds. Many of the hunters turned for home as the elements were against them (not unusual for the weather to be stormy in November here in Ireland) and the fox was proving to be very wily and elusive.

Only a handful of riders including Thomas decided to brave the storm and carry on. Turning in his saddle Thomas noticed a newcomer to the group. Sitting atop a fine black stallion, which looked so fresh it was as though it has just left the stables, was a tall fellow dressed in grey with great thigh boots.

Thomas called out to the man, ‘Good day to ye, a poor day for sport.’ The man did not answer just merely grinned at Thomas showing large discoloured teeth before turning his horse and proceeding to ride up the slope of the hill.

At that exact moment, the hounds started to bay and howl as though they had closed in on the fox. Thomas galloped up the hill following the sound of the baying hounds. When he reached the top of the hill he reined his horse in, astonished, as the hounds were nowhere to be seen. Instead to his surprise, his eyes fell upon a shocking tableau. The stranger had dismounted his horse and was standing holding the bloody corpse of the fox proudly high above his head. The stranger smirked at Thomas as he lowered the fox and in one swift bite, he bit the brush (the tail) straight off the poor fox. Dropping the carcass he offered the brush to the now totally disgusted Thomas.

The young squire feeling sick turned to leave refusing the terrible gift. The man stopped him in his tracks when he spoke, ‘Conolly if you will not take the brush will you offer me a cup of something hot in your great house.’

Thomas and Lady Louisa, like his great-aunt Katherine, were famous for their warm hospitality and although the stranger, with his leering smile, turned Thomas’s blood to ice he felt he could not refuse the man. Reluctantly answering the man Thomas said, ‘There is hot rum punch at my house for all that wants it.’

Entering Castletown House at Conollys’ side the stranger paused as he looked around the great entrance hall, spying the staircase sweeping down from the gallery the stranger emitted a low hissing laugh much to Thomas’ disgust.
The stranger following the other huntsmen took a soft seat by the welcoming fire. When a servant approached the man to help him remove his soiled boots the stranger waved him away snarling, ‘Leave me be! I am sleepy and do not wish to be disturbed.’

The man quickly settled down for a comfortable nap. Curious, Thomas approached the man for a better look at him. Astonished now Thomas took a step back when he saw how hairy the man was, hair covered the back of his hands and seemed to carry on up his sleeve. Tufts of course hair sprung from his ears.

Warily Thomas called for two servants to remove one of the boots off the now soundly sleeping stranger. Carefully sliding the boot off the man the servants cautiously revealed a thin hairy leg, terminating in a great black hairy hoof.

The company all leapt from the fireside terrified by what they saw. Thomas quickly sent a servant to bring the parish priest, when the priest arrived the stranger awoke. Seeing that his boot had been removed the stranger leapt with a snarl and stood by the mantelpiece despite the heat from the roaring fire.

The stranger let loose a high chilling laugh, exactly like Lady Anne had heard all those years before, freezing the blood of all those present. The priest petrified tried to mumble out an incantation much to the amusement of the demonic interloper. In desperation, the priest threw his missal (a book containing all the text needed for masses throughout the year) at the figure. He missed his target and hit the mirror above the fireplace shattering it into a million pieces.

The threat of being hit by the holy book was enough for the strange man who leapt into the air and vanished, the only sign that he had ever been there was the dirty greasy boot and a huge crack in the stone fireplace. The ghost of Castletown House has never been seen since.