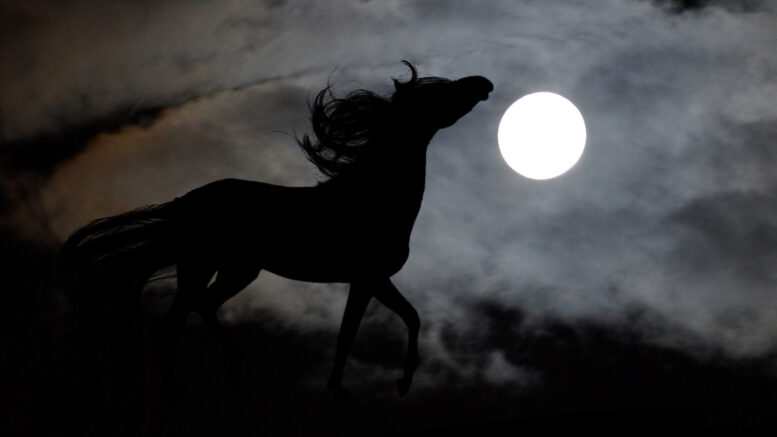 The meaning of Pooka, pronounced poo-ka, is from the old Irish word ‘púca’, which means ‘goblin’. There are many variations of the spelling Pooka including Púca, Plica, Phuca, Pwwka, Puka, and Pookha all of which are totally acceptable. It is possible that the origin of the word Pooka may come from the Scandinavian word, Pook or Puke meaning ‘nature spirit’.

What is a Pooka?

A Pooka is a shapeshifter and can take any form it chooses. Usually, it is seen in the form of a horse, dog, rabbit, goat, goblin, or even an old man. Traditionally a Pooka is seen as a dark, sleek horse with a long wild flowing mane and luminescent golden eyes.

An important thing to always remember about a Pooka is that they have the power of human speech and when inclined make great sport of those they talk to as they like to embellish the truth.

In Ireland, the Púca seems to be the most feared Faerie possibly because it appears only at night and enjoys creating havoc and mischief. We feel this is doing the Pooka an injustice because there are no recorded incidences of a Pooka actually causing a human any harm.

Where can you find a Pooka?

Pooka’s can be found in any rural location, every county in Ireland has its very own Pooka. They like open mountainous areas so that they can run free while in horse form.

Many small mountainous lakes and springs in Ireland are called ‘Pooka Pools’ or ‘Pollaphuca’, which means Pooka or Demon hole. Some of these are found at the sources of major Irish rivers such as the Liffey that runs through Dublin City or the River Bann, which is the longest river in the north of Ireland that runs through the town Coleraine.

During the Christianization of Ireland, the process of converting the pagan population to Christianity, some of the Pooka Pools were renamed to St. Patrick’s Wells.

There are a lot of superstitions and customs about Pooka’s that are still observed in Ireland. These superstitions vary depending on which region you happen to find yourself in. Although there seems to be common ground when you talk about a Pooka some of the stories are alike and just differ on the minor details.

When a Pooka is in horse form he tends to have fun by inviting a rider to jump on his back. This usually happens when the rider has had a little too much to drink and is making his weary way home from the pub. Thus starts the wildest trip the rider will ever know for the Pooka loves to terrify the rider with its great prowess jumping over hedges and rocks and making death-defying leaps. Come the grey dawn the rider is thrown off the horses back and left trembling but none the worse from the night’s events to find his own way home.

This is maybe where their reputation slips a bit as while on a wild night out like this they do tend to run through crop fields and knockdown fences without care.

A conversation with a Pooka

Another thing the Pooka love, as with all us Irish people, is to chat and will happily stop and ‘shoot the breeze’ with you, sometimes giving great advice and making exceptional prophecies.

In some rural areas, you will see houses that will have a bench on the right side of the door and the gate post on the right will be smooth whereas on the left there will be a rockery or some sort of uncomfortable mound. This is because a good Pooka will always sit on the right and the more mischievous sprite will favor the left.

They tend to use the same opening gambit to introduce himself it will be something like, “You are new here I think. Many years ago I used to live in this house..” One of his favorite topics is how the family lost its fortune or was swindled out of their money and lands.

The odd thing about a conversation with a Pooka is that you may have sat and chatted to him an hour but suddenly he disappears. Without saying good-bye, they never say good-bye, you will be left wondering if the past hour was real. They’ll never leave any sign they were there.

Mainly associated with Samhain (31st Oct) and November 1st is considered Pookas Day. This coincides with the harvest and the traditional customs that when the harvest is being brought in the reaper must leave a few stalks behind. This is called the Pookas share and must be left to appease the Pooka because we for one would not like to incur his wrath.

It is said that when we see the rain falling on a sunny day, which it does a lot in Ireland, the Púca will definitely make an appearance that night.

Also, berries that have been killed by a frosty overnight should never be eaten as it is the Pookas spit that is on them and that would render them poisonous. The Pooka in all his shapes and forms has made it into many books and films one of the most famous is Harvey the six-foot white rabbit from the play by Mary Chase immortalized in film by Jimmy Stewart. Or the infamous scene in Darby O’Gill and the Little People when the Pooka scares Darby into falling down the well and he first meets King Brian of the leprechauns.

More modern films have Pookas appearing in animal form as well for example in the 2001 film Donnie Darko, a Pooka in rabbit form encourages Donnie to do malicious acts which have a positive and negative result on the people around him.