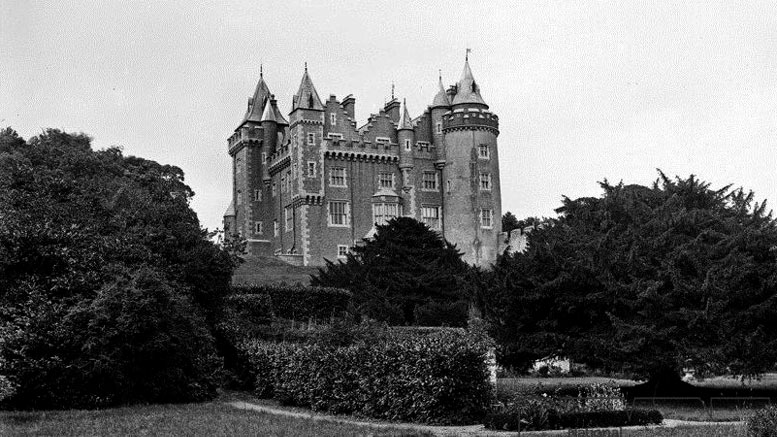 The castle in this tale is Killyleagh Castle on the shore of Strangford Lough in County Down. It is a stunning building with it’s’ turrets reaching high into the sky. Its architectural style is that of a Loire Valley Chateau. It is also believed to be the oldest Castle in Ireland with bits of it dating back to 1180.

Today it is owned by the Hamilton family as it has been since the 17th Century, our tale of one woman’s determination to keep her home no matter what takes place just before the Hamilton’s moved there.
The lady in question, Anne, was the wife of the 1st Earl of Clanbrassil he was a supporter of the Stuart King Charles the first in the civil war against the parliamentarians.

Oliver Cromwell was making his way across Ireland at the time capturing any strongholds he could but when he reached Killyleagh Castle he met with a force that stopped him in his tracks.

The siege of Killyleagh Castle

The Earl himself was not at the castle at the time having raised a small army to try and take back Carrickfergus Castle which was now under Cromwellian reign. He failed to make any difference and his army fled to find safety. The Earl himself fled and tried but could not make his way back to his home.

The Earls wife Anne alone with no-one to protect her and her children called to the tenants and retainers that lived on the estate and as they arrived she armed them with anything she could find in the castle.

They barred the gates and settled in for a siege. Soon Oliver Cromwell and his army arrived and the battle commenced. A woman and a few untrained men should not have been a problem for the Cromwellians but the determination of Anne held tight and forced Oliver’s army back.

Again and again, the Cromwellians attacked the heavily barred gates and walls only to be met with a barrage of anything from arrows to kitchen furniture.

Inside the castle walls, food began to run out and Anne and her faithful garrison started to starve it was only then a white flag of truce was sent out. Oliver Cromwell accepted and allowed the makeshift army to leave the castle led by their strong and fierce leader, Lady Clanbrassil.

Cromwell imposed a fine of £10,000 on Clanbrassil but this was halved after Lady Clanbrassil pleaded and begged, she also managed to get her husband pardoned.

The ghost of Lady Clanbrassil

Killyleagh still stands on the side of the Lough much altered and rebuilt in the 19th Century. The great hall still exists and it is said to be patrolled by the ghost of a woman. The local people in the village and anyone who knows the history of the castle have no doubts that it is the spirit of Anne Countess of Clanbrassil, still protecting the castle that she so valiantly held against the mighty army of Oliver Cromwell.