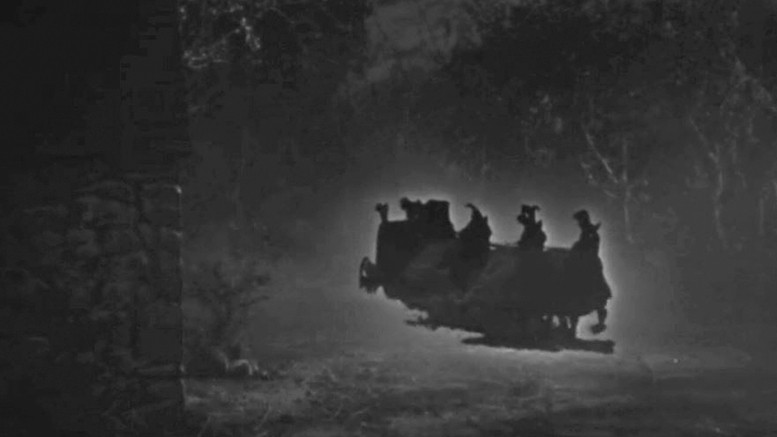 The story of the death coach of Ballyduff is from Irish folklore. It about one man’s freighting experience of seeing the Cóiste Bodhar, the death coach.

All over Ireland not only do we listen for the sounds of a wailing Banshee we will also be on the lookout (fearfully so) for the Cóiste Bodhar, the Irish for the deaf or silent coach. Its more commonly known as the death coach.

It is said that if death is upon us or someone we know, mainly a family member, then it cannot return from whence it’s been sent without a passenger. The most famous film version of the Cóiste Bodhar is of course from the magnificent Darby O’ Gill and the Little People when King Brian tricks Darby into leaving the Cóiste Bodhar. Still, to this day I cannot hear the term Cóiste Bodhar without conjuring up images of the Dullahan (headless horseman) calling to Darby to enter the death coach from that film.

All over Ireland, you will hear plenty of tales about the death coach but this particular story takes place in Ballyduff. It actually came via a correspondence from Clonmel who sent it to Mr. T.C Croker who included it in his book Fairy Legends of Southern Ireland.

The death coach in Ballyduff

One fine summer afternoon Michael Noonan was walking into Ballyduff to collect a pair of brogues (shoes) he had left with the cobbler (shoemaker/mender). His way took him on the towpath alongside the river past the now derelict Hanlon’s Mill.

To Michael’s surprise he could hear, as clear as a bell, the sounds of the huntsmen and hounds at full cry even though he knew this couldn’t be true as the Duhallow Hounds ( formed in 1745 they are the oldest continuous hunt hounds in Ireland) were in a totally different area.

Fear took the place of Michael’s surprise when he heard the unmistakable ‘clack – clack’ of the mill’s mechanism working as it had been deserted years previously. He ran, as though the hounds were chasing him, all the way into Ballyduff.

Upon reaching the cobblers a breathless but relieved Michael met his old friend and neighbor, Darby Haynes. Darby was a carrier by trade, wishing to wait for his nephew to get to town he asked Michael to take his horse and cart home. Michael was only too happy to assist and certainly didn’t fancy the walk home past Hanlon’s Mill, especially as it was getting dark.

The dark, as it turned out, was to be the least of Michael’s worries that night. The moon rose full and bright clearly lighting the road. Michael knew the horse had a hard day’s work so he drove slowly home. Settling comfortably back in his seat Michael lazily watched the reflection of the moon in the river, letting the old horse lead the way.

Michael sat bolt upright suddenly as the reflection of the moon disappeared. It was a cloudless sky, so where had a cloud come from? What Michael saw next turned his blood to ice, looking around he saw a large black coach draw silently alongside him. The coachman and the six coal-like horses were all draped in black. However, as this was not terrifying enough they were all headless.

The coach quickly came abreast and passed the frightened Michael. The coachman laying his whip soundlessly across the backs of the horses disappearing as quickly as it had come into view. Michael Noonan, trembling, somehow made it home, settled the horse in the field, and got sleeplessly through the night.

The next morning standing watching the horse Michael was pondering the previous night’s events. Daniel Madden, a huntsman to Mr. Wrixton of Ballygibben, came riding into view at a mad pace.

Stepping into the road Michael waited for Daniel to reach him. “For the love of God don’t stop me!” gasped the rider. “Whatever has happened?” Michael asked. Madden was able to gasp out, his master had fallen ill and was close to death’s door. He told Michael if he wished to help he was to run and fetch Kate Finnegan, a midwife. Michael went as fast as he could. Of course, he knew it was too late when he realized the Cóiste Bodhar claimed its latest passenger.