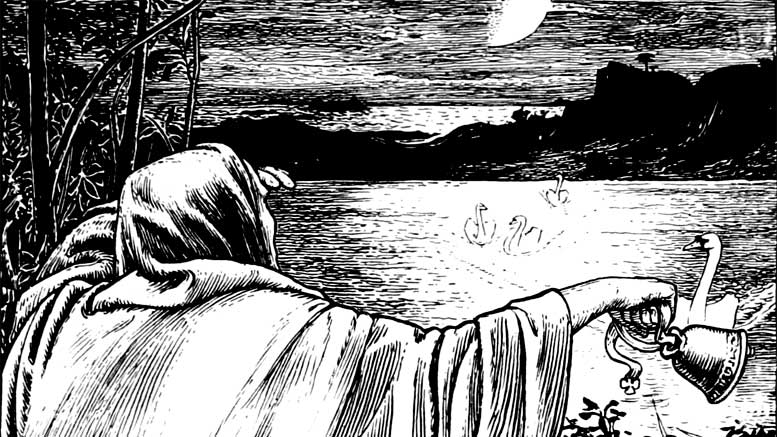 The Children of Lir is a famous legend from the Irish Mythological Cycle. This a sad tale about the love of one family, jealousy, magical spells and a curse of 900 years.

The King of Tuatha Dé Danaan

A long time ago in Ireland, before the time of the Gael, there lived the people known as the Tuatha Dé Danaan. They were a mystical race with very potent magic  and their king was known as Bodh Dearg.

King  Bodh Dearg was a fair and wise king but one of his nobles, Lir, disliked him immensely. The King was very much aware of Lir’s resentment of him but he was wise enough to know that he needed to keep his kingdom united. In order to placate Lir and soothe his resentment, King Bodh Dearg decided to give him one of his daughters as a wife.

The Children of Lir & Aoibh

Lir was indeed pacified and of the two most beautiful daughters of Bodh Dearg he picked Aoibh. Although it was a marriage of convenience, a great love grew between Aoibh and her new husband. In time she bore him a very beautiful daughter, Fionnuala, and three handsome sons, Aedh, Conn, and Fiachra. The family was filled with happiness and love but as always, sorrow has a way of seeping into a happy heart.

Aoibh fell ill and died, breaking not only her children’s hearts but also tearing the heart of Lir into little pieces. Bodh Dearg was astounded at the love the family had for his daughter and for each other so he decided to give his second daughter, Aoife, to Lir. Thinking that Aoife would be as kind and as gentle as her dead sister, Lir accepted her as his new wife. He really hoped that in time he and his bereft children would grow to love Aoife as much as they loved Aoibh.

The jealousy of Aoife

Now Aoife, as beautiful as she was, did not have the same gentle soul as her sister. She saw how devoted her new husband was to his children and the love the children had for their father. Her heart was filled not with love and devotion but with a deep burning jealousy.

Aoife wanted all of Lir’s love for herself and she came to hate her niece and nephews from the bottom of her rotten heart. So when she and the children were returning on a visit to the house of her father, Bodh Dearg, Aoife decided the children should die.

Aoife ordered her servant to slay her step-children but when he refused she decided to do it herself. However, when it came to doing the deed she found that she didn’t have the courage so decided to use magic upon them instead.

She conjured up all the power she could and cast a spell upon the poor children, turning them into swans and binding them to live 300 years on the waters of Loch Daibhreach (Lough Derryvarragh) followed by another 300 years in the north on the Struth na Maoile (Straits of Moyle) flying between the coasts of Éire and Alba.

Even after 600 years they were not to be freed from their curse but they would have to spend another 300 years in the west on the wild seas of Iorus Domnann and Inis Gluaire (Inish Glora). Aoife also cast the spell so that it would not be lifted until the children would hear a bell ring announcing the arrival of a new religion.

Satisfied that the children were out of the way she continued on her visit to Bodh Dearg. When he heard what had happened to his grandchildren, Bodh Dearg was incensed and though he could have killed his daughter there and then, he decided that was not punishment enough for her. He, in turn, decided to use magic and he cast his daughter Aoife away from him and all mankind by turning her into a demon of the air.

For 300 hundred years the four beautiful swans lived on the calm waters of Loch Daibhreach feeding on sweet grasses from the green fields around and the fish within the lake. Their father, whose love for him never waned, came and spent time with them until it was his turn to leave the world, leaving them heartbroken once more.

Time had come for them to fly north east to the stormy stream of Maoile where the gales sweep through from the icy north. Here, for three hundred more years, they lived on the storm wrecked shores of Ireland and Scotland. This time there was no father to comfort them, they had only each other.

The ringing of a bell

The time came for the sweet and beautiful children of Lir to fly west to the stormy western sea. They settled on Inis Gluaire and for another 300 years they feed upon wrack and fish on the coasts of that terrible sea. Their sorrow was unbearable but one day something different happened.

As the four swans fed they heard a noise, a pleasant clanging noise. Although they had never heard anything like it before they knew what it was, a bell. They just knew it was a bell and they realised that their time of freedom was at hand. They went towards the source of the noise and saw that someone approached them along the shore.

The strangers on the shore was unlike anyone that they had known before, most certainly not from the Tuatha Dé Danaan. He had a tonsured head and wore a rough homespun habit tied around the waist with a súgán (rope). They spoke to him in greeting surprising him and he asked them who they were. They related the saga of their misfortunes and he felt a great pity and love for them and in turn told them that his name was Caomhóg.

Arrival of a new religion to Éire

The Dé Danaan were no longer on the land but had retreated into the sidhe underworld. The children of the Gael now held the land and the old gods were no more for Patrick had come to Éire bringing news of the Christ Child who was the true God.

Caomhóg was a monk and he asked the swan children to go with him to his cille. There he would look after them until the day the curse would finally be lifted from them and to this they agreed. As they patiently waited the monk explained the new religion to them.

One day a warrior entered their life. Shouting that he was Lairgnen, the king of Connacht, he wanted the swan people as a wedding gift for his new wife Deoch. Caomhóg stood in front of the king and rebuked him saying “you shall not have them” and then he rang his bell a second time. Immediately the swans feathers fell away and they returned to human form.

All the years that the children of Lir had lived began to show on their bodies and they aged very quickly. Lairgnen fled in terror but Fionnuala and her brothers each urged the monk Caomhóg to baptise them. They knew that very soon they would perish and Fionnuala instructed the monk as to how they should be buried. Fionnuala placed in the middle with Fiachra and Conn on either side of her, Aedh was put in front of her. And this is how four of the Tuatha Dé Danaan entered into the Kingdom of Heaven.