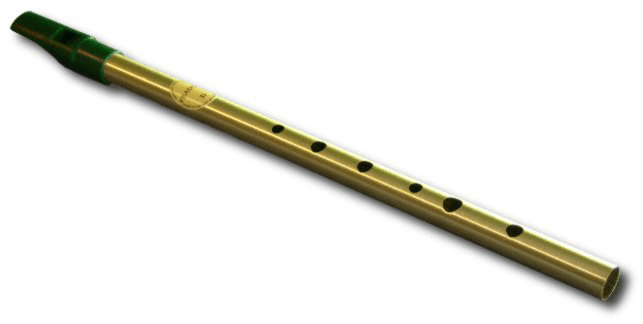 The Tin whistle is also called a penny whistle or feadóg stain. It is a well known and regularly used instrument in traditional Irish music.

It is a simple six-holed, wood-wind instrument, and remains in the same category as the flageolet, recorder, Native American flute, and other woodwind instruments. A tin whistle player is known as a tin whistler or whistler.

History of the Tin Whistle

Historical research notes that the oldest surviving tin whistle dates back to the 12th century. However, players of the fealodan are also mentioned in the description of the ‘King of Ireland’s court’ found in the Brehon Laws dating from the 3rd century A.D.

The term “Penny whistle” came to light on the streets of Dublin in the late 1500s because of the whistles popularity among beggars and vagabonds in Ireland. The word “tin whistle” also came to light as early as 1825 but neither word seems to have come common until the 20th century.

The first factory-made tin whistles were produced by Robert Clarke in Manchester and later New Moston, England. Up to 1900, they were also marketed as Clarke London Flageolets or Clarke Flageolets. The whistles fingering system is similar to that of the six hole, simple system, “Irish flute” (“simple” in comparison to Boehm system flutes). The six-hole, diatonic system is also used on baroque flutes and other folk flutes and was of course well known before Robert Clarke began producing his tin whistles circa 1843. Clarke’s first whistle, the Meg, was pitched in high A and was later made in other keys suitable for Victorian parlor music. The company showed the whistles in The Great Exhibition of 1851.

In the second half of the 19th century, some flute manufacturers such as Barnett Samuel and Joseph Wallis also sold whistles. These had a cylindrical brass tube. Like many old whistles, they had lead fipple plugs. However, since lead is poisonous, caution should be exercised before playing an old whistle. Today the lead fipple plugs have been replaced by plastic, which is safer and hygienic.

Learning to play the Tin Whistle

If you are looking to learn how to plat don’t stress about using music scores. Listen to other whistlers and recordings, learn by ear. Scores are never used in live performances.

Tin whistle players use a number of different ornaments to embellish the music, including cuts, strikes, and rolls. However, the term “ornamentation” has a very large difference in classical European music to traditional Irish music. The tin whistle has a pure tone, it can be high in pitch and used for upbeat performances.