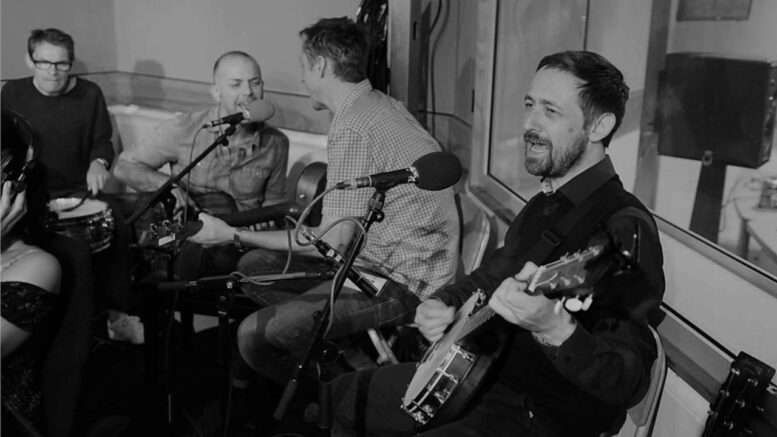 The Divine Comedy is one of Ireland’s most respected indie-pop bands. Skilled frontman, Neil Hannon, indisputable talent for writing, arcane and witty personality, and his penchant for rich and fulfilling music it is without a doubt that one must experience the romanticism and opulence that The Divine Comedy gives its listener.

The early years of Neil Hannon

Today The Divine Comedy is essentially Neil Hannon. Born in Derry in the North West of Ireland and raised in Enniskillen, Hannon always had a great concern in fulfilling aspirations of becoming a successful recording artist. A love of good music was passed to him from his father, Rev. Brian Hannon. At a young age Neil learned how to play piano and became a choirboy at his father’s church.

In 1984 at fourteen years of age he was in his first band. It consisted of himself and Lawrence Hoy and eventually David Graham. The young trio practiced conscientiously in Hannon’s front room each day. Two years later they finally settled on the name October, according to the online website ‘A short site about The Divine Comedy’, this was in homage to U2’s 1981 album.

The birth of The Divine Comedy

At eighteen years of age in 1988 Neil Hannon failed his ‘A’ levels at college. This was due to the fact that he wanted to attend the R.E.M concert which was playing in Dublin at the same time. However, despite this scholastic error, later that year the band released its first album Exposition. It wasn’t long after this that the band hired a manager, Gary McGrade. Hannon changed the name of the band to The Divine Comedy, getting inspiration from the book of the same name by Dante Alighieri. This would be the beginning of a successful music career in the life of Neil Hannon.

In 1990 Setanta, and Irish London based record label signed The Divine Comedy and the following year Fanfare for The Comic Muse, produced by John O’Neill of The Undertones, was released. By this stage, both Hoy and Graham had left the band for various reasons and their replacements Kevin Traynor and John McCullagh left also. Neil Hannon was now a solo artist; he was now The Divine Comedy.

Retiring to Enniskillen, it was here in his parents’ home that he wrote his witty and satirical music eagerly, and in 1993 he released Liberation, his first solo album. Liberation was distinctive, deep and attractive, an album which bared Hannon to his audience, an album which liberated him as an artist, a performer. It was also an album that received enthusiastic reviews from the press. Hannon had put his name on the musical map.

Although Liberation was adored by the media, it sold little mostly due to the fact that The Divine Comedy was unknown to the British music scene. However, his next record Promenade although once again got great reviews, including being Q’s album of 1994, failed to reach the charts. This did not prevent The Divine Comedy from making waves within the music world.

The bands climb to fame

Hannon supported Tori Amos on tour and was also being played late-night Radio 1 on the Mark Radcliffe set. Now with a name in the indie music scene, Hannon was approached by the creator of the TV Show, Father Ted, to create the theme song. It would later have lyrics added and eventually become a single on the album ‘Songs of Love.’

By 1996 The Divine Comedy was at its peak of popularity with the release of Casanova, an album that saw Hannon become more appealing to the public. To add to this, BBC Radio DJ Chris Evans played the first single from the album Something for the Weekend live on his radio show and the public and critics ran with it. By the end of the year, The Divine Comedy was playing gigs such as the Reading Festival or the Shepherds Bush Empire.

Returning to the Shepherds Bush Empire, the band recorded; A Short Album About Love a seven-track album. Recorded live with a full orchestra it was released on Valentine’s Day 1997 and was critically acclaimed due to its romantic and honey-sweet lyrics and melodies.

The band toured most of 1997 and released their next album towards the end of 1998. Fin De Siècle reached number 9 in the album charts which proved to be the highest placement they had seen in their career until that point. Generation Sex and The Certainty of Chance, both singles released from the album, proved successful for the group. However, it was the release of ‘National Express’ which seen the band reach the top ten singles chart and it has become the anthem of The Divine Comedy.

After a chance meeting with Solo artist Robbie Williams in 1998, Neil put his talent of making music to good use, and he featured on the superstars hit No Regrets and continued to tour with him in 1999.

Transformation of The Divine Comedy

Over the following years, The Divine Comedy went through a major transformation. Beginning with leaving Setanta, their record company of ten years to join EMI and working with Tom Jones it was a demanding time for the band as The Divine Comedy was now recognized as an electrifying live act.

2001 was the year the Regeneration album hit the shelves, which they released three singles from; Love what you Do, Bad Ambassador, and Perfect Lovesong. However, it was also the last album in which the band would record as a group. Through times past The Divine Comedy’s line-up had various members. However, it was in 2001 that Chris Worsey and Joby Talbot performed with Neil for the last time in November of that year back in Belfast, Northern Ireland.

Hannon decided to continue to perform as a solo artist under the band’s name. In 2004 he released Absent Friends, which was followed by a number of tours and live performances. After this Hannon seemed to prefer behind the scenes. He wrote for and with other artists including names such as Air and Jarvis Cocker to name a few.

Victory for the Comic Muse was released in 2005 and was received with a warm welcome by critics. Two years later, Neil Hannon received the Choice Music Prize, Ireland’s equivalent to the Mercury Music Award.

After Bang Goes the Knighthood was released in 2010, Hannon began to put his writing skills to the stage. He developed the musical Swallows and Amazons in 2011 as well as the opera Sevastopol in April 2012.

With the release of the Foreverland in 2016, The Divine Comedy reached #3 in the Irish album chart. 3 years later Office Politics was released and reached #5 in the UK Album chart.