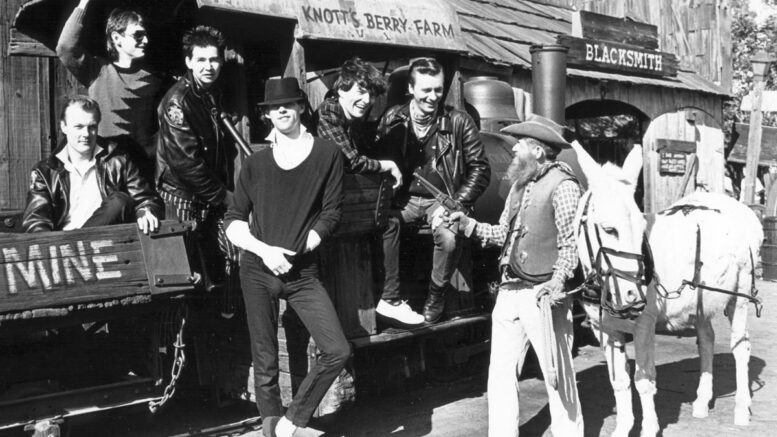 The Boomtown Rats were an Irish rock band, which scored a series of UK hits between 1977 and 1980. They were led by vocalist Bob Geldof, who organized the Ethiopian relief efforts, Band Aid and Live Aid.

All six members were originally from Dún Laoghaire in Ireland. The name “Boomtown Rats” comes from a gang in Woody Guthrie’s autobiography, Bound for Glory. They became a notable band. However, their accomplishments were overshadowed by the charity work of frontman Bob Geldof, an ex-journalist with NME magazine.

The group moved to London in October 1976 and became associated with the punk rock movement. Signing a recording contract with Ensign Records, they released their debut single Looking After No.1 in August 1977.

With their rising popularity over the next few years, the band did claim a popular place in the music industry for themselves, gaining a few hits such as Like Clockwork, She’s So Modern, and Rat Trap.

However, the group suffered a setback in 1979 and did a little damage to their reputation with the song I Don’t Like Mondays. Written in response to the famous School Shooting in California by Brenda Ann Spencer. However, the song did reach number 1 in the UK, and was a worldwide hit, with the glaring exception being the United States. Fears of lawsuits and charges of bad taste kept radio stations there from playing the record. The unofficial boycott was front-page news in Variety Magazine, the only time the Boomtown Rats earned such prominent coverage.

Many years later Guitarist Gerry Cott left the group. According to Bob Geldof’s autobiography, Is That It? Cott had grown disillusioned with the band’s growing laziness in the studio and their greater reggae emphasis, in addition to being bullied by the rest of the band for his dissension.

He resigned the day before the end of their 1981 world tour. It was only hours after the rest of the band had decided to sack him for refusing to join the rest of them and the road crew, for a drink to celebrate Simon Crowe’s birthday. Cott had a short-lived solo career, releasing two UK singles, “The Ballad of the Lone Ranger” and “Pioneers” and the 1984 Canadian single “Alphabet Town”.

The decline of the Boomtown Rats

They also managed to alienate a large part of their early punk/new wave fan base. Their switch to a more reggae and funk orientated sound, a fate befalling many punk/new wave bands that dabbled in the same way, such as The Clash and Stiff Little Fingers.

Despite this change, the Boomtown Rats soldiered on and continued as a quintet with the band’s fifth album, V Deep, released in February 1982. However, it sold poorly not helped by the first single Never In A Million Years, being sold in a blank sleeve without the band’s name on it this resulted in many fans not knowing of the single’s release.

From this point, the band suffered an onward decline.

After this, the band was mothballed whilst Geldof wound up his affairs with the Band Aid Trust. During which time Geldof succeeded in getting the band a one-album deal with Vertigo Records. However, both Crowe and Fingers refused to rejoin the Boomtown Rats full time to pursue their own band,” Gung Ho”.

The band’s final performance came at Self Aid, a 1986 concert featuring many Irish rock stars, to raise awareness of unemployment in Ireland. Their penultimate performance, “Joey’s On the Street Again”, was 12 minutes long with an extended bridge, during which time Geldof ran amongst the crowd. Following this performance, Geldof addressed the crowd, saying, “It’s been a great ten years; rest in peace”. The band then performed “Looking After No.1”.

Following the band’s break-up, Geldof launched a solo career with Pete Briquette continuing to work alongside him. Garry Roberts co-wrote songs for Kirsty McColl before going to work first in insurance, and then in boiler maintenance. After Gung Ho, split, Fingers became a highly successful music producer in Japan, as well as being part of the Japanese band, “Greengate”. Simon Crowe is in a West Country-based Celtic instrumental band called,” Jiggerypipery” and also ran a clock making business.